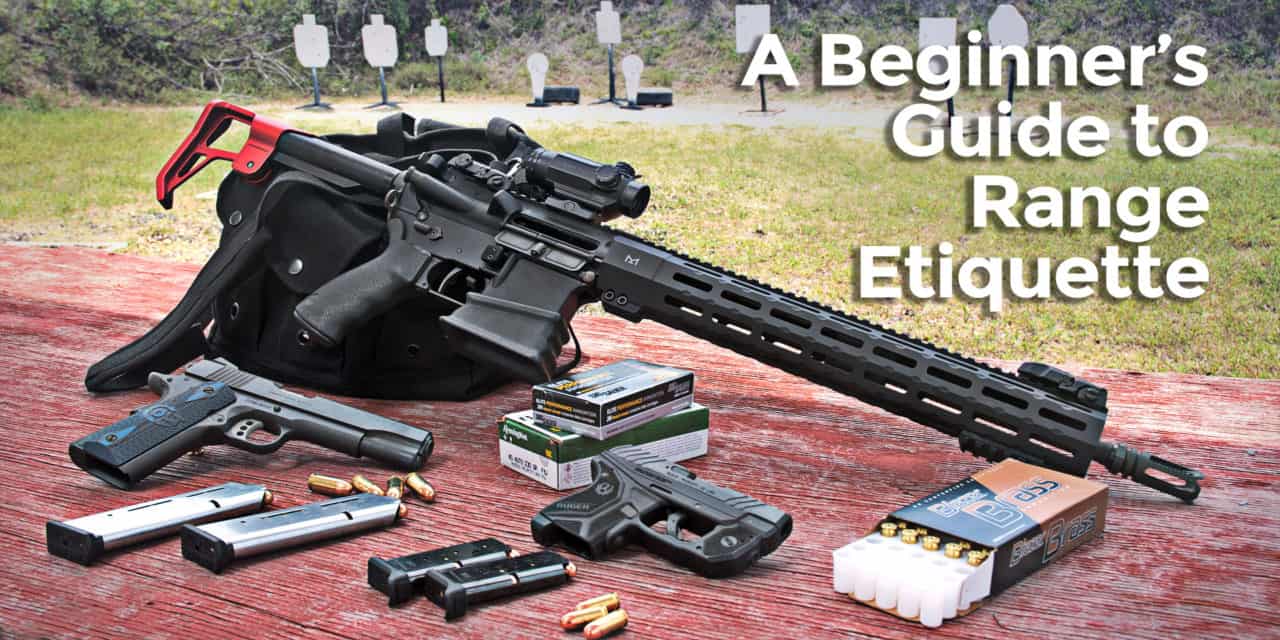 Etiquette is a word that isn’t in use as much as it once was. Etiquette is a set of rules, spoken and unspoken, which we all agree to live by as a culture because we’ve found, through trial and error, that everybody is happier if you chew with your mouth closed or something similar.

You know the rules of gun safety, but do you put them into practice all the time? We’re supposed to keep our muzzles pointed in a safe direction at all times, so why do some people insist on uncasing their guns behind the firing line, then sweep everyone at the range with the muzzle of their gun as they place it at their shooting position? The rules of gun safety aren’t just for firearms classes or competitions, they’re for every time we pick up a gun, including every time we go to the range.

Be Aware Of Who’s Around You

Outdoors, if you’re firing a large-caliber rifle like a .50 BMG or shooting a centerfire rifle with a muzzle brake, try to choose a firing location that’s isolated from the people around you. Nothing disturbs your concentration like someone else’s gun booming in your ear and throwing exhaust gases in your face.

This is even more true on an indoor range. Indoors, any centerfire rifle is going to louder than a pistol, especially if you’re shooting a gun with a muzzle brake or compensator. In addition to this, the noise associated with larger-caliber handguns is even more noticable indoors. If you’re shooting an AR-15 or a .44 magnum, and there’s a choice of which lane to use, choose one that is further away from the other people at the range.

If you’re shooting a semi-automatic rifle or pistol, your spent cartridges are going to go flying out of your gun. There’s a chance they can go flying into the lane next to you, especially if you’re shooting at an outdoor range with no dividers between the lanes. Having hot brass cases fall into the crooks and cracks of your clothing and burn your skin is no fun at all.

Ask me how I know this.

If you’re launching rounds into the next lane over, take a moment to shift your position, or see if you can set up a shooting bag or something similar to stop your shell casings from bothering those around you. Conversely, if an empty cartridge drops onto and is caught in your clothing, don’t jump up and down trying to get it out. A hot brass cartridge up against the skin can hurt, but wildly swinging your gun around as you try to remove makes a bad situation very much worse.

When hot brass falls in-between you and your clothing, first make sure your gun is always pointed in a safe direction at all times and your finger is off the trigger. Then, use your support hand to tug and adjust your clothing until the casing falls free.

Speaking of spent brass, during longer range sessions, it’s probably a good idea to take a moment in-between shooting sessions and pick up your brass, in addition to picking it up at the end of your range time. Also, make sure you pick up your brass, and no one else’s. Many people, myself included, reload our ammunition and we reuse those casing to make new ammunition to shoot.

Shoot Your Target, And No One Else’s

Shooting your target and only your target isn’t just a good idea, it’s also a safe idea. Unless you’re shooting a competition that’s specifically built around shooting targets from a variety of positions, you’re most safe if you send your rounds into the target that’s right in front of you. That’s how the range is set up to be used, and that’s the best for all involved. Shooting your target and your target alone is also the polite thing to do at the range. 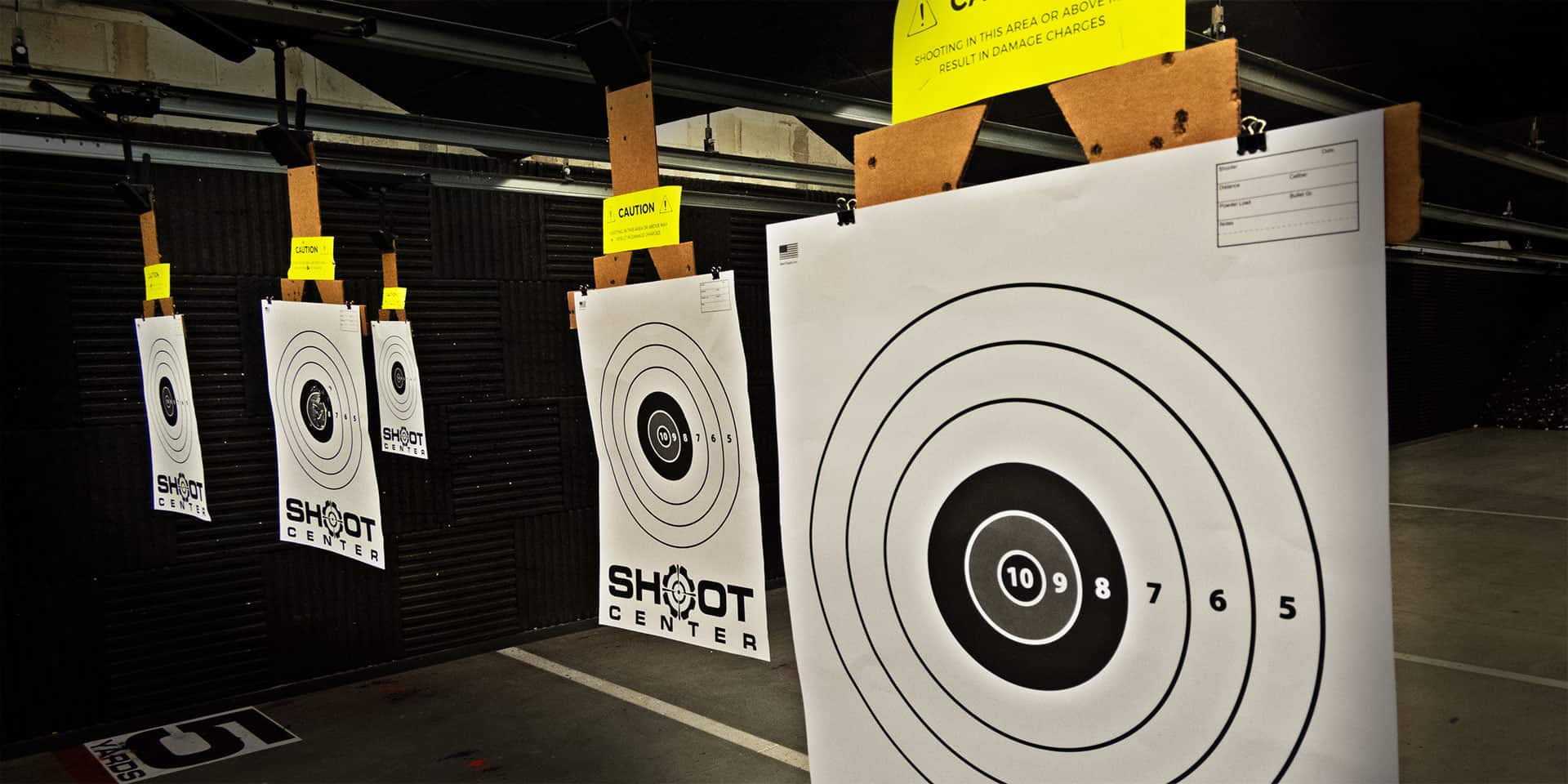 One of these targets is yours, the others are not.

For example, a few years ago, I was at a public outdoor range sighting in a rifle at 100 yards. During a cease fire, a group of shooters to my left set up their target at 50 yards. When the command to resume fire was issued, they began to blaze away at their target with their rifles, and only a few of their shots hit their target. A good percentage of those missed shots were hitting my target further downrange, frustrating my attempts to get my rifle sighted in. I politely mentioned to this to them, and they had the decency to calm down and take more care with the shots, but that incident wouldn’t have happened if they had been paying attention to Rule Four: Always be aware of your target and what is surrounding it.

When I worked at a gun range, one of my biggest complaints was new customers who walked in and assumed that the rules they followed at their previous range applied to the range where I worked. While some rules were the same, some weren’t, and what might have been safe at one range was decidedly not safe at my range.

Take a moment to read the rules when you walk into the range. Chances are, the rules will be pretty much the same as every gun range you visit, but sometimes there are house rules, like caliber restrictions, how close you can set up targets or how quickly you can fire your gun that can make a big difference in how much fun you have on the range.

Also, don’t assume that everyone else on the range is “that guy” and is going to do something stupid. There is always a chance, no matter how trained you are, that today might be the day you do something less-than-smart during your range session.

When In Doubt, Be Nice

Cultures create etiquette and rules of behavior for a reason, and chances are, those reasons are to make sure that everyone plays nice and stays safe. Gun culture is no different. The rules of gun safety tell us what’s expected of us when we go shooting, but it’s the rules of gun range etiquette that make them happen everyday, every time we go to the range. Shoot your guns, have fun, and stay safe so that there will be future trips to the range as well.