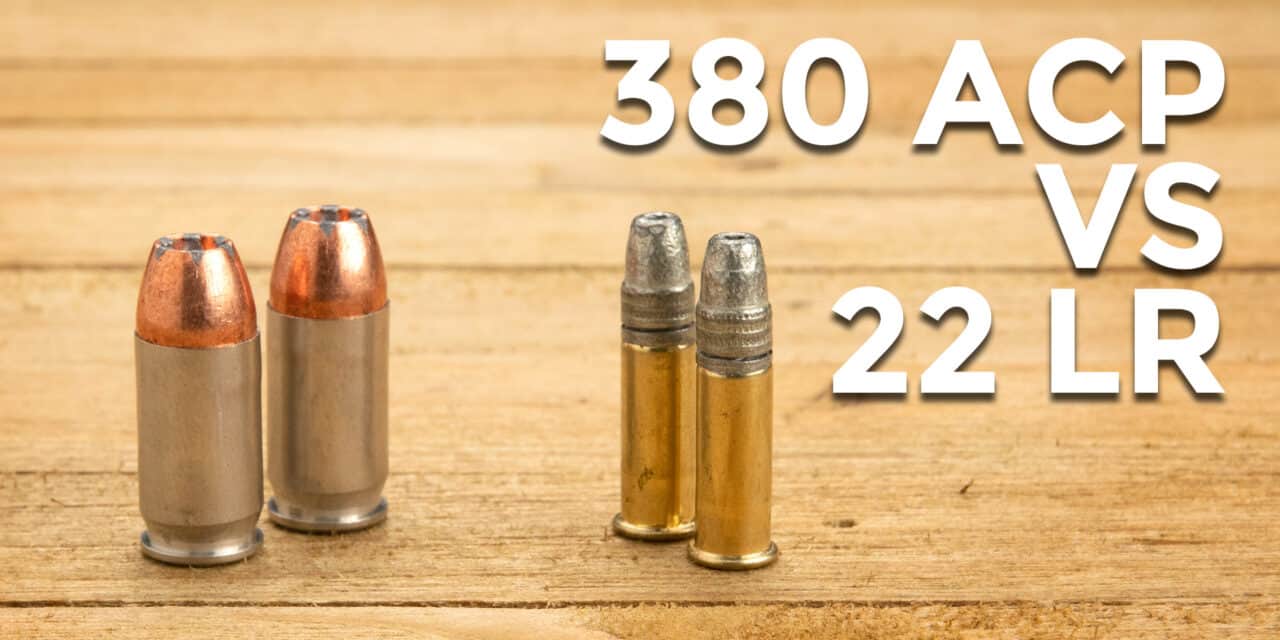 Let’s face it. The defensive pistol caliber wars are over, and 9mm has won. The FBI is using 9mm now instead of .40 S&W and law enforcement agencies all over the country are following their example. It’s even more noticeable when it comes to armed self defense for American citizens, where compact 9mm pistols are almost literally flying off the shelves. Despite this, for various reasons, there is still demand for defensive pistols that are chambered in less powerful cartridges. Let’s look at two of those cartridges, and see how 380 vs 22 LR stack up against each other when used in a defensive pistol.

22 LR is one of the oldest, if not the oldest cartridge still in common use. It can trace its roots back to the 6mm Flobert cartridge, which was introduced fifteen years before the start of the Civil War. 22 LR came about later, in the mid 1880’s, and is now one of the most popular cartridges in the world. 22 LR is used by everyone from Olympic athletes who are striving for a gold medal to families in the backyards who want to enjoy a relaxing afternoon plinking at empty cans.

380 ACP isn’t quite as old as 22 LR, making its debut in the early 1900’s. However, it is the product of John Moses Browning, an absolute legend in the firearms industry. Browning is responsible for iconic designs such as the 1911 pistol, M2 .50 cal machine gun and many other popular firearms.

What are the differences between using 380 vs 22?

One of the biggest differences between 380 vs 22 is how they are used. 380 ACP ammo is, for the most part, a “unitasker.” It serves one purpose in American gun culture, and that is to work as a defensive round in a semi-automatic pistol. 380 isn’t commonly used in sporting competitions, and isn’t really thought of as a hunting round, either.

22 LR ammunition, on the other hand, is used for just about everything involving a gun. It’s tremendously popular in competitions and is also a very common hunting round for small animals. Using 22 for self defense probably shouldn’t be your first choice, however it can be done.

Another big difference with 380 vs 22 is how each round is constructed. 22 LR is a rimfire round, and 380 ACP is a centerfire cartridge. In addition to this, both the caliber (aka diameter of the bullet) of a 22 round and the size of the shell casing are significantly smaller than a 380 ACP round. A 22 LR case is just over 0.6 inches long, with a bullet diameter of 0.223 inches. A 380 ACP case, on the other hand, is just about as long (0.68 inches) but the bullet it fires is 0.355 inches in diameter. This means there is a lot more room for powder inside a 380 ACP case than a 22 LR case, resulting in a more powerful round.

Both 380 ACP and 22 LR are not as powerful as the wildly popular 9mm round. This can work in your favor, as it means the guns that fire these lower-powered rounds have less recoil, which allows you to get in a follow up shot faster. However, it also means that both 380 and 22 have less of a chance of penetrating into a human-sized target and hitting something that can stop an attacker. The question then becomes, do the advantages of using a lower-powered round such as 380 ACP or 22 LR offset the lower penetration? 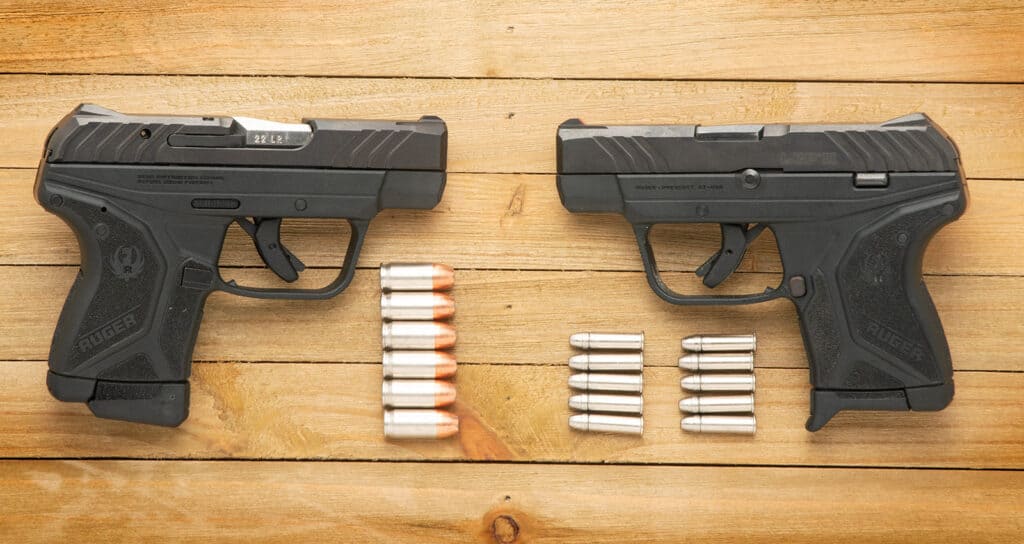 We’ll also shoot five shots of a common defensive round from each caliber into ballistics gel, an industry-standard testing medium. Real-world experience has shown that rounds which can penetrate 12-16 inches of gel covered with four layers of heavy cloth can penetrate into a bad guy and stop the threat.

The ammunition we’ll be testing is:

The guns we’ll be using are:

The Sccy obviously isn’t a 1-1 comparison with the other two guns. It is, however, a small 9mm that can be easily used as a pocket pistol, much like the two Rugers, and will serve as a baseline in our tests.

The drills we will be using are the Mozambique Drill and the Bill Drill. Both drills rely on quick, accurate shots and both acknowledge the fact that a pistol, any pistol, is not a guaranteed one-shot stop. We’ll shoot each drill from the low ready and do three runs of each drill with each gun, then average the times together.

Newton’s Second Law of Motion states that force is equal to mass times acceleration. This means that a smaller bullet is going to generate less recoil when traveling at the same speed as a larger bullet. And guess what, Newton is right. The LCP 22 was an absolute joy to shoot. The gun moved hardly at all during recoil, and I could clearly see the sights as the action cycled and the gun came back on-target. Honestly, the biggest thing slowing me down in the Bill Drill wasn’t recoil, it was how fast I could pull the trigger.

The baseline gun, the Sccy CPX delivers the most power on the target. This, however, is a double edged sword, as it also moved the most during recoil and was quite uncomfortable to shoot. For example, the shot timer I used measures split times, the time in between each shot. The average split time for the Sccy during the Bill Drill runs was 0.54 seconds, while the average split for the 380 LCP was 0.45 seconds, and the 22LR LCP was 0.28 seconds.

State Of The (Pocket Pistol) Art 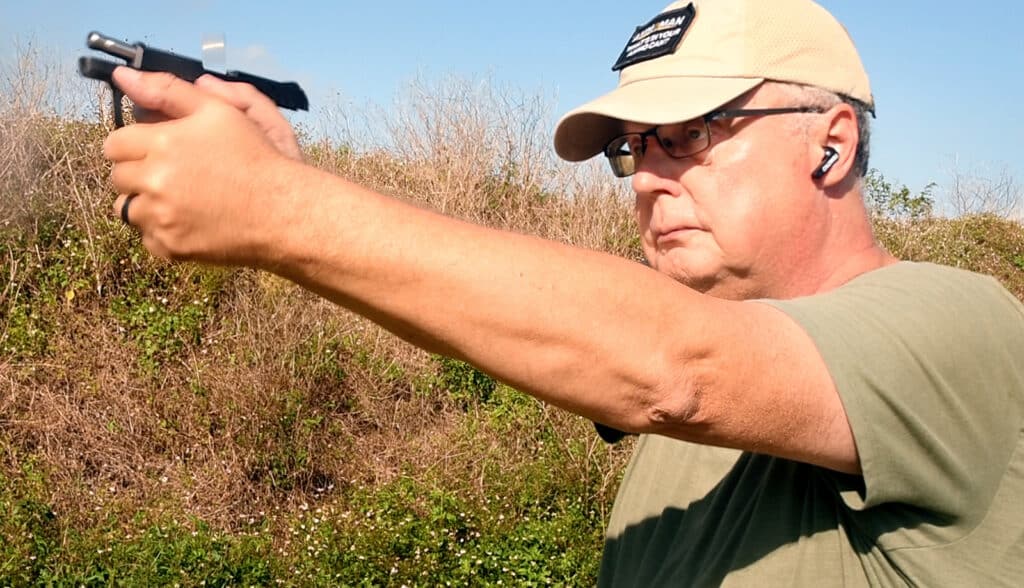 The tiny little 22LR LCP2 had even tinier amounts of recoil

Even though the two guns are essentially identical to look at, there were big differences between the LCP2 in 380 vs the 22 version. The sights are better on the 22 version, and it has an external safety. There are 6 rounds of 380 versus 10 rounds of 22LR. That’s important, because I’ve yet to hear a gunfight survivor say “Boy, did I ever have too much ammo with me!”

For the record, I know about the Ruger LCP Max, which holds 10 rounds of 380. It’s also wider and harder to conceal, more akin to the Sccy CPX-3 than these two guns. Is it a good defensive pistol? Yes. Is there a comparable 22LR version? Not really.

Either way, our test showed once again that 380 ACP hollow point ammunition just doesn’t have the oomph to reach the FBI minimum penetration of 12 inches into gel. Full metal jacket, or FMJ ammo, would be the way to go with this caliber.

The fact is, one of the biggest differences with 380 vs 22 is that 22LR can be used for so many different things, while 380 is a bit of a one-trick pony. 380 is, in essence, the round you use when you want something slightly less powerful than a 9mm. This seems a bit ridiculous to some of you, and I can hear you thinking, “Why would you want an underpowered version of an already underpowered cartridge?”

When it comes to self-defense though, it’s the round that penetrates and shuts off the heart, lungs or brain stem that stops the threat once and for all. If a round of 22LR can do that faster and more often than a round of 380, is there really a need to use 380 as a defensive cartridge right now?

I’ll leave you to decide that question.