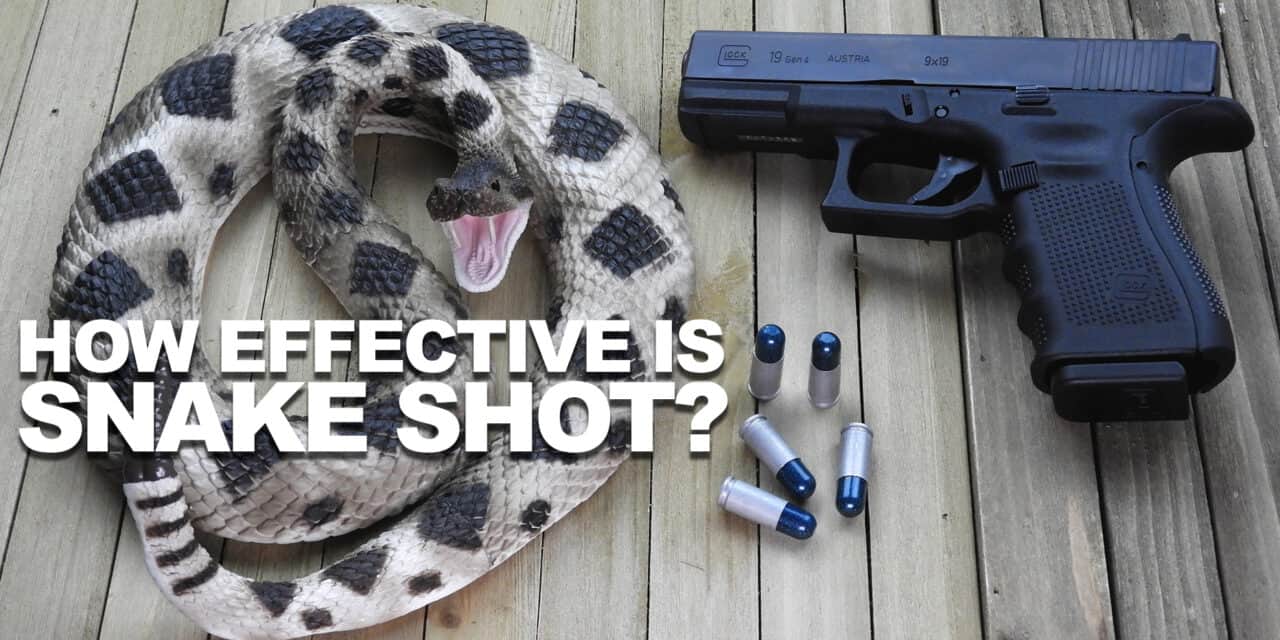 What Good Is Snake Shot?

I used to work at a large indoor shooting range, with a clientele that varied from hyper-wealthy gun owners to everyday working men and women. One day, a customer told me that his choice in defensive firearms was a .38 revolver loaded with snake shot. He wasn’t the first person to tell me this. It seems there are still gun owners out there who think that snake shot, or shot shells designed for use in pistols, are a valid option for self defense.

So let’s talk about snake shot, and what it is good for.

What Is Snake Shot? 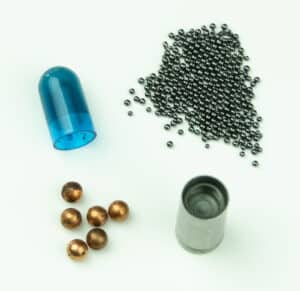 Simply put, snake shot is a shotgun cartridge you can shoot out of a pistol. They are sized the same as common pistol cartridges, and as such, they carry a smaller amount of shot pellets than most shotgun cartridges. There is one exception to this: the Taurus Judge and similar guns. This pistol, and others like it, are capable of firing both .45 LC pistol cartridges and .410 shotshells. We’ll talk more on this gun and what it does later on. For now, let’s talk about snake shot in more common calibers, such as 9mm.

A snake shot cartridge is composed of a case (usually aluminum), a primer, and gunpowder. Instead of a solid bullet at the end of the round, snake shot has a plastic wad that holds shot pellets and a plastic cap that keeps them in the round until fired.

Aside from the aluminum case, this is almost identical to the components of a conventional shotgun shell. However, the capacity at the end of round of snake shot is significantly smaller than any shotgun round, even a .410 shotgun cartridge.

Pistols Are Pistols. Shotguns Are Shotguns.

One of the defining characteristics of a shotgun is that it is a smoothbore firearm. There is no rifling inside the barrel of a shotgun like there is on a rifle (hence the term “rifle”) or in a pistol. The accuracy of a rifle or pistol relies on the spin that the rifling imparts to the bullet, stabilizing it in flight. However, rifling inside a shotgun barrel has the opposite effect. Spinning the shot cup and wad inside the barrel imparts centrifugal centripetal force to the shot cop and everything inside it, which in turn spreads out the shot once it leaves the barrel. This reduces the amount of shot pellets hitting the target at a given distance, and therefore reduces the accuracy of the gun itself.

Bottom line is, rifling in a rifle or pistol barrel is good, rifling in a shotgun is bad. This is a fact that will pop up later in our testing.

Should You Shoot A Snake?

Good question. To be honest, I am not a big fan of the slithering critters. However, I’m also not a fan of shooting an animal just to shoot it. The fact is, cows kill more people than snakes do, so unless the snake is venomous and is posing a direct threat to you or you feel that a venomous snake on your property is a bad idea because of small children, pets, or something similar, leave the snake be and it will leave you be.

Shooting a snake with a shot shell or any other type of round is thankfully a rare occurrence, but is nevertheless both very scary and potentially deadly. With that in mind, let’s find out what snake shot actually does.

As snake shot is essentially a pistol-sized shotgun shell, we’re going to test its effectiveness like we test shotguns. We’ll be testing how dense the shot pattern is at common distances for a snake encounter. We will then test how far it penetrates into a clear ballistics gel analog of a snake. We will also test common defensive loads for both a 9mm Glock 19 and the Taurus Judge, which fires both .45LC cartridges and .410 shotshells.

The ammo we’ll be testing is:

The 9mm snake shot contains quite a lot of #12 shot. This is much smaller than the shot normally used in a shotgun shell. Each pellet is the equivalent of 0.25 of a grain and is just 0.053 inches in diameter. Inside of each 45 Long Colt shot shell round are pellets of #9 birdshot, which is slightly larger and heavier. The PDX-1 ammunition is a very popular choice in self defense ammunition, and it has a unique structure. The PDX-1 ammo consists of four “plated disks” (essentially flattened-out buckshot). It also contains 12 BBs, all of which are contained in a wad very similar to a shot shell. The 9mm round is 124 grain HST, one of the most popular defensive rounds for that caliber.

Finding out just how tight or spread out the pellets from your shotgun are at any given distance is an essential part of determining how effective your gun really is. Full-sized shotguns are normally patterned at 30 yards. However, as snakes have a limited striking distance, we will test at much closer ranges. In addition to this, snakes usually attack only when threatened. They won’t follow after you if you happen upon one in the wild. Snake attack distances, therefore, are measured in feet, not yards. As such, we’ll be testing our ammunition at distances of 5 feet, 10 feet, and 15 feet. Our target is a 2 ¼” inch wide outline on a USPSA target, which is about the same diameter of an adult prairie rattlesnake. Our aim point for all the tests is a spot approximately two inches from the top of the outline, or about where the head of a snake would join its body. 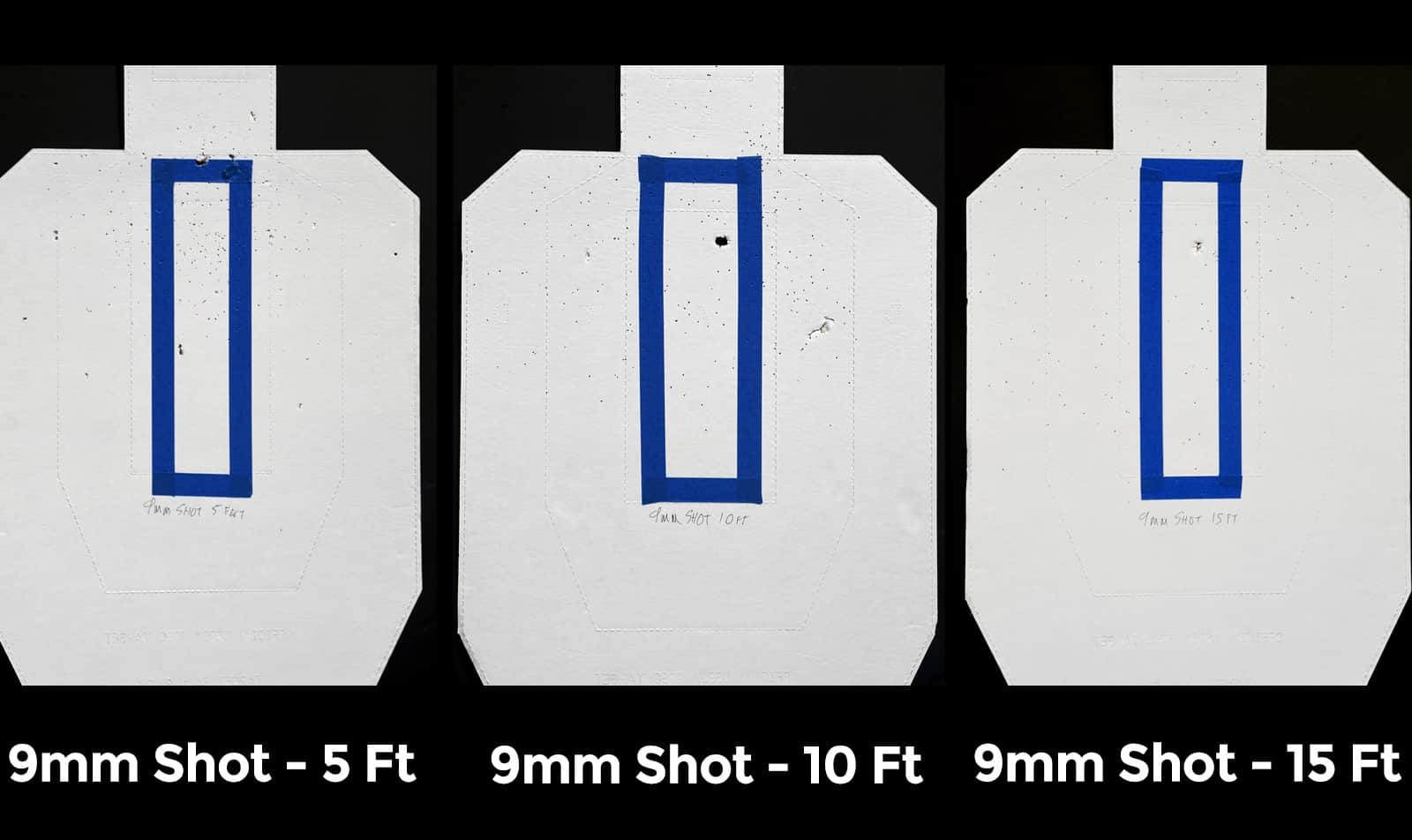 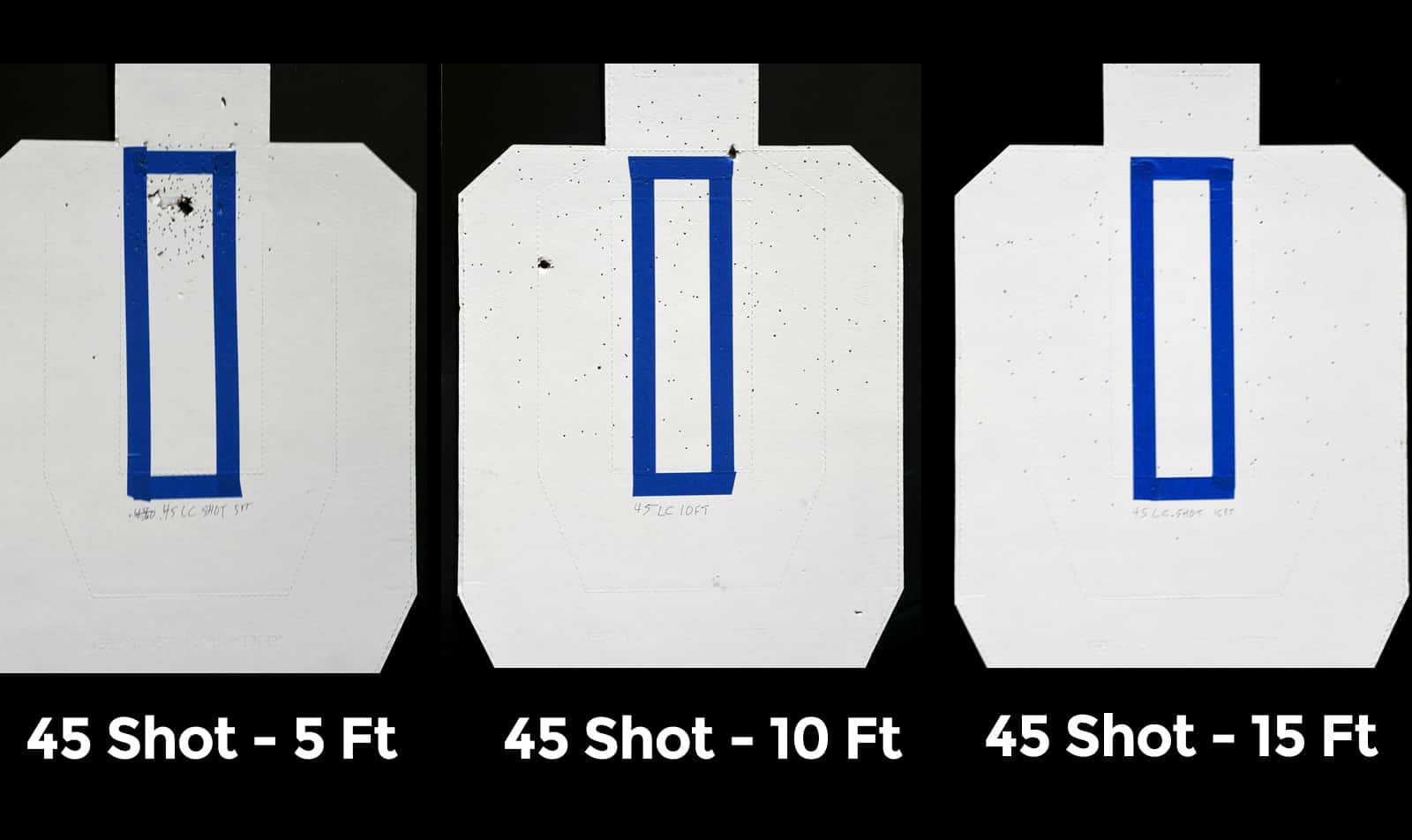 As we said earlier, rifled barrels and shot shells don’t go well together. The rifling in the barrel spins the cup that holds the shot pellets as they travel down the barrel. As such, they spread out like water from a sprinkler head when they leave the barrel. This was definitely reflected in our pattern tests. Both the 9mm and 45 LC snake shot rounds held most of their pellets on target at five feet, as did the Winchester PDX-1 round. Things went downhill after that, and quickly. At ten feet, both the 45 LC and 9mm shot spread out significantly. At fifteen feet, only a few pellets impacted the target inside the outline of our snake. Based on these results, if you shoot at a snake with snake shot, make sure it’s from a very close distance. 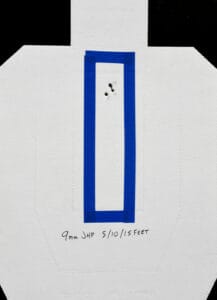 The Winchester PDX-1 round was interesting. The three “plated disks” held together in a tight group at all three distances. However, where that group would hit on the target would vary widely. All three shots had the same aiming point; however, the discs landed slightly to the right of the target at ten feet and distinctly above the target. This is consistent with the discs engaging the rifling in the barrel of the Judge and then spinning out randomly after the round was fired. The twelve BBs inside a round of PDX-1 also spread out significantly as the distance to the target increased. These results make me believe that is would be an ineffective choice for use against snakes.

The 9mm jacketed hollow point round, however, was able to strike on the centerline of the target at all three distances. Any of these shots would be an incapacitating blow to even the toughest of snakes.

We’ll be testing penetration on a four inch cylinder of clear ballistics gel. This is a little bit larger than most venomous snakes in the United States. However, it will suffice for our testing. One round from each ammo type in our test will be shot into the gel from a distance of five feet. 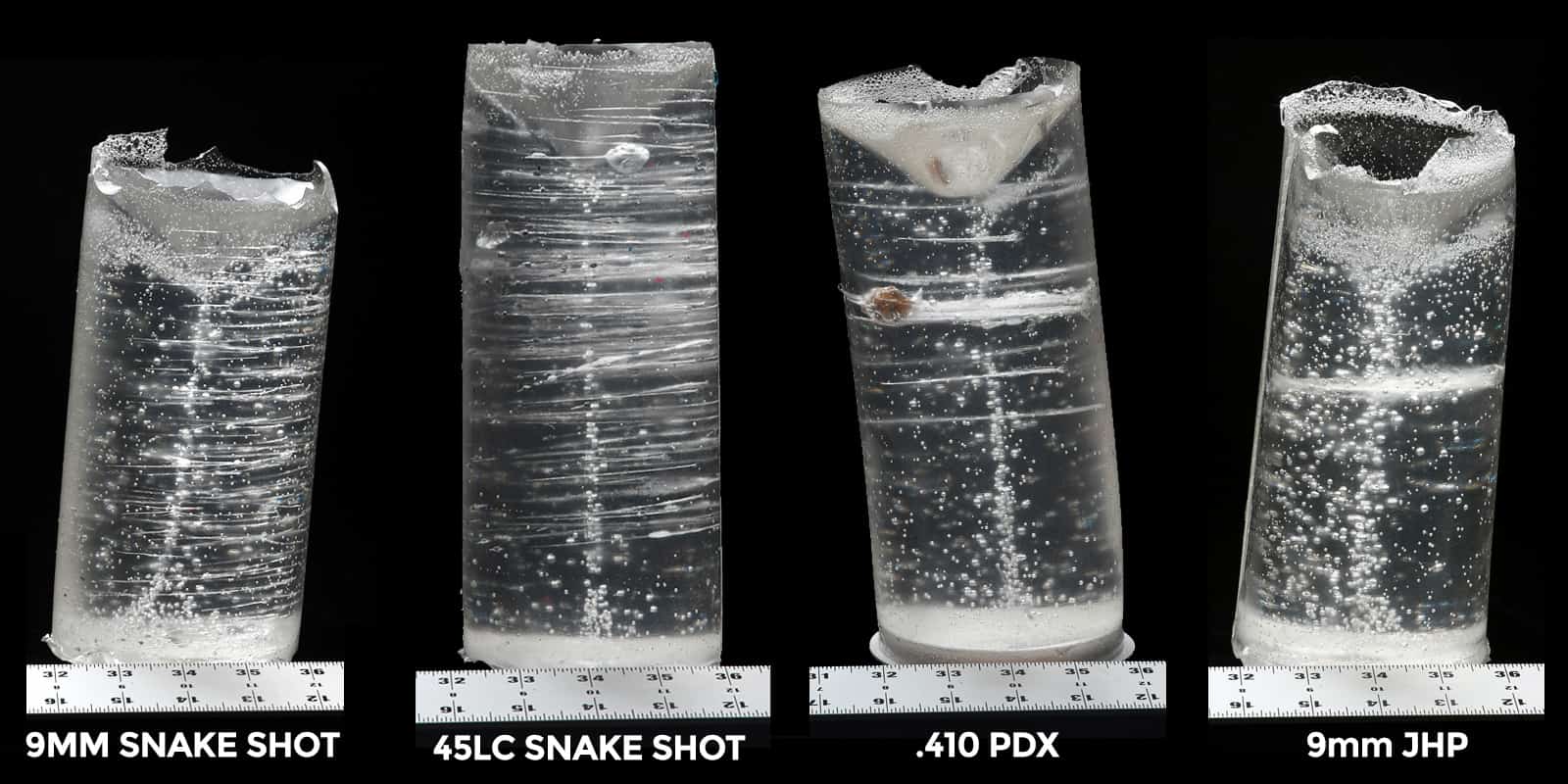 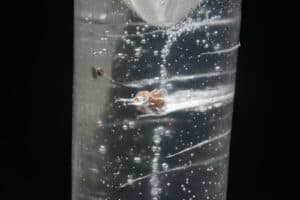 The 124 grain HST round can penetrate over sixteen inches of gel, so it zipped right through our test snake. The 45 LC snake shot penetrated well at five feet, making it through 3.75 inches of gel. The lighter shot inside the 9mm snake shot did not fare as well, penetrating only about 2.5 inches.

Once again, the PDX-1 round had different results. The BBs penetrated right up to the back edge of the four inch column of gel. The three plated disks, however, were nowhere to be found, although the plastic wad that held them inside the shotshells came to a stop about 3.75 inches into the gel.

Does snake shot work against snakes? Possibly, especially at close distances under a couple of yards. However, it’s also very possible to put a round of your standard defensive ammunition into the head of a snake at such distances.

This is even more true when it comes to snake shot for self defense against human beings. A round of snake shot won’t penetrate more than a few inches into ballistics gel, indicating it lacks the power to reach the vital areas needed to stop an attacker in his or her tracks. Snake shot is a novelty round, and therefore should be used in novel situations — not as a defensive round for use against snakes or human beings.