Sccy has been around for quite a few years and has a reputation for building compact 9mm pistols that are very affordable. This year, Sccy ramped up full production on their new .380ACP CPX-3 pistol. It’s now available for sale in a gun shop near you and can be found for under $200 in some cases.

The CPX-3 is very similar to the 9mm CPX-1 and CPX-2, only smaller. At 4.9 inches long, it’s slightly shorter than the other two pistols.  It also has a shorter 2.96 inch barrel. While the CPX-3 retains the same width, height, and weight as its 9mm cousins, it somehow feels a bit smaller than the other two guns.

Sccy’s CPX-3 ships in a cardboard box with an instruction manual, a certificate for Sccy’s excellent lifetime warranty (more on that later), a gun lock with two keys, and three 10-round magazines. Two of the magazines have a flat baseplate on them for more discreet carry in a pocket, while the third has a small extension that’s perfect to rest your little finger on as you shoot.

First Impressions of the CPX-3

Due to its double-stack magazine, the CPX-3’s grip is a little thicker and more comfortable to hold than the other guns in this test. However, because it’s a .380, the grip is a little shorter back to front than other double-stack pistols in 9mm (or larger) calibers. All the controls on the CPX-3 are placed right where I expect them to be. Aside from pulling its long, heavy trigger, the gun is very comfortable to shoot for extended periods of time.

Like other pistols in this test, the Sccy CPX-3 is a double-action only pistol.  This means that each pull of the trigger cocks the hammer to fire the gun and then releases the hammer to drop on the primer at the base of the cartridge.  That’s what makes the gun go “BANG!”

Did I mention the CPX-3’s trigger is long and heavy? Good, because it is. It has at least an inch of travel from reset until it trips the sear. And, according to my trigger pull scale, it took an average of 10.1 pounds of effort. This is quite a lot of effort to pull a trigger, putting it right up there with the amount of effort needed to pull back the hammer and rotate the cylinder on a double action revolver. That 10.1 pound trigger (with over an inch of travel) takes a good deal of effort to use. It might be a little too much for older gun owners or people of smaller stature.

That’s the bad news. The good news is the other functions on the CPX-3 are quite easy to perform. I measured the amount of effort needed to pull back the CPX-3’s slide using a scale that measures the draw weight of a bow. On average, it only took 11.5 pounds of effort to rack the slide on this gun.  That’s one of the best results in this test. Other nice ergonomic features include a slide release that is easy to operate and finger grooves that were actually in the right place (a rarity in my experience).

Range Review of the Sccy CPX-3

On the range, the CPX-3 pointed a bit high for me. The sights on the gun are adjustable left and right for windage, but they are not adjustable for elevation. So, I had to adjust my aim instead. Despite the heavy trigger, it was a lot of fun to shoot, and the 10 rounds in the magazine only added to that fun.

Like the other guns in our compact .380 test, I shot over 500 rounds of ammunition through the CPX-3. Here are the results:

Shooting the 10+ pound trigger on this gun got to be wearisome. I had to break up my range time into two sessions of 250 rounds each in order to give my trigger finger a rest. But the gun felt great in my hands, and reloads and all gun manipulations were easy to perform. 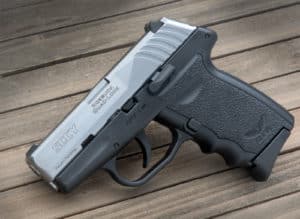 Results of Our Testing 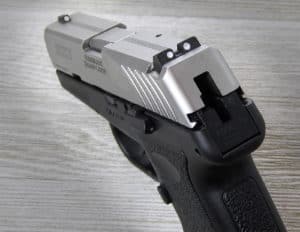 Is the Sccy CPX-3 Accurate?

At 15 yards from a rest, the Sccy CPX-3 turned in groups that were in the middle of the pack for our test. The short sight radius and stiff trigger worked against this gun — even when shooting off a rest. Clearly, this is a gun that is meant for closer distances and not for long-distance shooting.

Reliability of the Sccy CPX-3

The Sccy tied with the Ruger LC-9 for the worst reliability in our tests. However, unlike the Ruger LC-9 (which did not like certain brands of ammunition), the CPX-3’s failures occurred with different brands of ammunition. This indicates that the issue lies with how ammo is fed into the gun. CPX-3 owners should pay attention to whether one magazine causes more grief than the others.  If that happens, you should contact Sccy for guidance.

The Final Word On The Sccy CPX-3 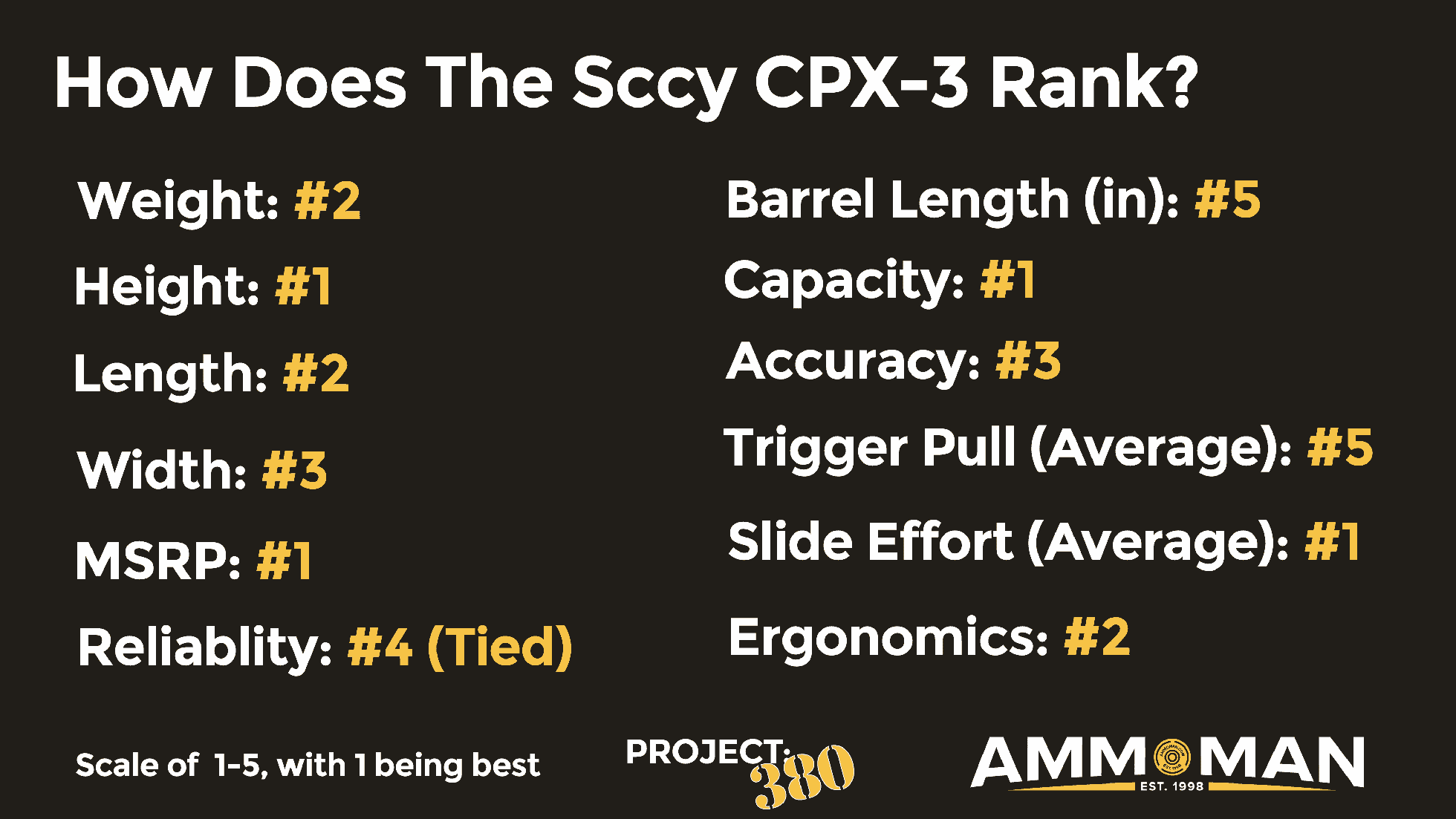 The Sccy CPX-3 is definitely the price leader out of all the guns we tested. With a 10+1 round capacity, it also held the most ammo. But it was tied for last in reliability and was in the middle of the pack for accuracy. Its small size makes it a good choice for someone who is looking for an easy-to-shoot defensive pistol for the home that can also work as a concealed carry pistol.