What is Full Metal Jacket Ammunition and Why Use it?

Whether you’ve been shooting all your life or you’re just getting started, you’ve probably heard the term “Full Metal Jacket.” It’s not just a movie with a lot of yelling. It’s also the most popular type of ammunition on the market today.  This is because it’s cheap, widely available, and well-suited for several different types of shooting.

Before the advent of full metal jacket ammunition (commonly called “FMJ” or “ball” ammo), the only real choice was using uncoated pellets or bullets. You can still find ammo made with uncoated lead bullets, but it’s not ideal to use with semi-automatic handguns for a few reasons.

First, lead is a soft material. If you push lead through a barrel at high speeds, you’ll leave residue (leading or fouling) that requires a lot of time, patience, and chemicals to remove.

Second, the lubrication coating on most lead ammunition can produce a ridiculous amount of smoke.  This makes it difficult to see your target for follow-up shots. Third, handling and shooting ammo made with uncoated lead increases your lead exposure. This is something every shooter should be trying to minimize.

The jacket on an FMJ round is not just a fashion statement. This jacket offers several advantages over uncoated or unjacketed lead bullets. The biggest of these are a reduction in barrel fouling and leading, the potential for higher muzzle velocities, and a reduction (not elimination) in lead exposure.

How is FMJ Ammo Made? A 9mm FMJ bullet recovered from a block of ballistics gel.

Manufacturers load FMJ ammo with a bullet that does not expand when it hits a target. It is a great choice for training because it’s cheap and generally available to buy in bulk.

All full metal jacket ammo is made using the same basic process. Manufacturers take a soft, bullet-shaped core (traditionally lead) and surround the exposed part of the bullet with a harder metal (usually copper or a metal alloy). The only part of the bullet’s core that is exposed is the base of the bullet, which sits inside the case.

If the entire bullet is covered, that’s called Total Metal Jacket, or TMJ.

When Should You Use FMJ Ammo?

FMJ ammunition is an appropriate choice for almost every type of shooting. It’s a perfect fit for plinking and recreational shooting because of its cheap price per round and wide availability. For the same reason, FMJ ammo is perfect for most types of competition shooting. It’s an especially great fit for practical style shooting, where you’ll be sending a lot of rounds downrange.

Another great time to use FMJ ammo is when you are practicing or training — even if you are training for self-defense. While jacketed hollow point (JHP) ammunition is the more appropriate choice for self-defense applications, it is significantly more expensive. You should make it a point to periodically test and train with your carry ammunition, but doing the bulk of your training with FMJ ammo will allow you to hone your skills without breaking the bank.

So, use FMJ bulk ammo if you’re planning to do a lot of shooting and you don’t need the bullet to do anything fancy when it hits the target.

When Should you Use Another Type of Ammo? Full metal jacket ammo is a great choice for most types of shooting. However, we don’t recommend you use it for self-defense.

FMJ ammo doesn’t expand the same way as ammunition specifically designed for self-defense use (like JHPs). That creates a significant risk of overpenetration (when a round passes through the intended target and continues at speeds that can still cause damage). This is a serious issue that can be mitigated by choosing the right ammo. So, take a pass on FMJ for self-defense purposes.

Using FMJ ammunition for larger game hunting is typically not advisable. Depending on where you live, it may also be illegal. Many states require hunters use bullets that expand or fragment on impact. FMJ ammo doesn’t expand.  This lack of expansion can result in a smaller wound channel that is more likely to only wound the animal rather than take it down humanely. 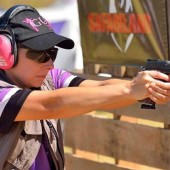 Jaci is a nationally recognized Second Amendment activist, accomplished gun writer, and Certified NRA Instructor. She's an active competitor in USPSA, IDPA, and ICORE, and she dabbles in long-range precision rifle shooting. Jaci currently sits on the board of directors of Phoenix Rod and Gun Club, where she's also a match director.