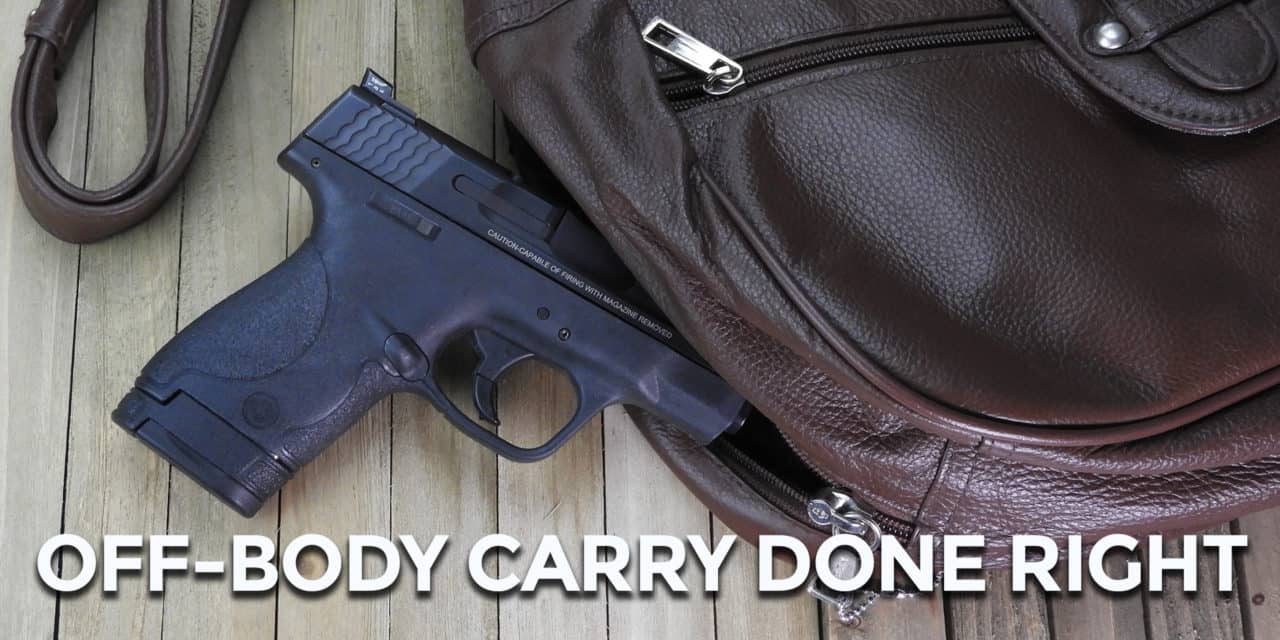 Why Use Off Body Carry?

If you walk into almost any gun store, you’ll see a selection of purses designed for concealed carry tucked away in a corner. Off body carry is a popular option for those times and places where it is difficult (if not impossible) to carry a defensive pistol on your body.  But are there better ways to carry a firearm with you every day? Let’s take a look.

Off body carry, whether it’s in a concealed carry purse or a messenger bag or a laptop bag or a backpack like this one from Elite Survival Systems, is pretty attractive because it allows you to carry a gun quite a large-sized gun, and quite frankly, and nobody notices. There are some advantages and some disadvantages to this, however.

Advantages of Off Body Carry

Disadvantages of Off Body Carry

First off, you’ve got a firearm in there, and as a result, this backpack, or your laptop bag, or your messenger bag, or your purse needs to become a part of you. You need to carry it to the restroom with you. You need to carry it with you everywhere you go. If you leave your office for a meeting, this needs to be locked up in a desk drawer somewhere because you’ve got a firearm in it now. If people poke around and they see this gun, bad things are going to happen. You don’t want that to happen to you.

Secondly, you want to limit the access that other people have to this bag. It’s no longer “Yeah, I’ve got that report, it’s in over there,” and they pull out your heater.

Not a good move.

Also, if you have children, you don’t want your child poking around inside this bag. Tragedies have happened where kids have poked around inside their mom’s purse, found a firearm, and bad things have happened. Keep that purse, that laptop bag, that messenger bag as if it was a part of your body.

Thirdly, you want to maybe look at going to a gun with a manual safety. If my gun’s in my holster on my holster on my waist, I know what it’s doing at every single moment. Inside of this bag? Not really. I mean, how do I know where it is right now? Even if I put a holster inside there, it’s out of my control. It’s out of my possession. I don’t really like that idea, so in this case, this airsoft gun actually has a manual safety. A manual safety gives you one more level of insurance against a bad thing happening. Is it a requirement? No. Is it something I like? Yes.

But The Biggest Disadvantage Is…

The biggest problem with off-body carry is, well, it’s off your body. And yes, we’ve talked about how you can make it a part of you and all the rest of that, but the fact of the matter is that once a person gets within interview distance, where they can talk to you and reach out and touch you, if they grab your bag, you’re now in a wrestling match for your gun and that’s really not a position where you want to be. There are some alternatives out there, because let’s face it, there are people out there, crooks, who are specially dedicated to snatching purses. We call those people “purse snatchers” and they also like backpacks or messenger bags and all kinds of things like this. If there’s something in there that they want (like a gun), we really want to make sure that they can’t get it. That’s why you might want to take a look at some of the alternative methods for on body carry, and we’ll talk about those right now.

Alternatives To Off Body Carry

Let’s talk about some of the alternatives now to off body carry.

First off, there’s the belly band. You can fit a fairly large size gun in here, underneath, and I know people who do just that.

Number two, you can go to a clip holster or holster that has little clips on it that attach to slacks. I have several women friends (who are) trainers and competitive shooters who use that for appendix inside the waistband carry and it works really well for them. Actually, it’s their primary carry method.

Thirdly, you might want to consider pocket carry if you can. One of the advantages of pocket carry is that it’s normal. It’s normal for people to walk around and have their hand in their pocket. Nobody thinks twice about that. And if you’re hand’s in your pocket, it can be on your gun. In this position right here, I’ve just halved my draw time because I no longer have to go up here (my side) or here (my waist) to draw my gun. I have my hand on my gun right now. Pocket carry has some very distinct advantages. However, if you are still going to go with off body carry, you need to get good at drawing your gun from concealment, and we’re going to go over that right now.

Drawing A Gun When It’s Not On Your Body

The off body draw is a five step process, and we’ll go through them right now.

A draw like this is a little bit clumsy because it’s not right in front of you. You’re not seeing what’s going on.
The second reason is, when you — even if you get to your gun — you’re gonna be flagging yourself on the draw. That’s a bad thing. A bullet goes through there, you’re out of the fight right away.

If you get it out and get it clear, you’re gonna be flagging everybody else out there. If bad things happen, if you’re under stress, you’re pointing your gun at somebody who doesn’t deserve to have a gun pointed at them.

Number two: Grab high. In this case, with the backpack, that is not a problem. But if I were carrying in a purse, I wouldn’t want to grab it down here, close to where the pocket is, because as I said, when you pull out your gun, (that’s the third step unzip, fourth step, grab your gun), we’re gonna show you why this is so important to grab high. You don’t want to pull it out and then flag yourself. With your gun in front of you, bad things happen like that. You want to avoid the bad things and maximize the good things.

Those third and fourth steps, which I jumped ahead to, were first step is turn,second step is grab high, third step unzip, fourth step grab the gun. Get a good firing grip on it before it comes out of the holster.

Number five: Present. Look where my hands are. I’ve got one hand here and one hand here, and my gun’s right here. This is natural, it just comes up as part of pulling out of the purse or the laptop bag or whatever. I’m in a great position here to go to a really stable two hand draw and present from retention. I can either shoot from here if a person’s close. I can even go a little bit closer and force somebody back like that. I can shoot from here. I can present a little bit more if they’re further they’re a little further away or I can go to a full drop and present to that area. Actually, that’s pretty good, or I can just hold on if I’m holding on to somebody else. I can shoot here, I can shoot from here, I could shoot from here… it’s actually a fairly decent draw.

That is one of the definite advantages of off body carry. When you draw properly, you set yourself up for a smooth presentation. Not bad.

The Final Word On Off Body Carry

If you choose off body carry, remember to do it safely. Don’t let people know you have a gun. Don’t loan your backpack or your purse out to other people. Keep track of your backpack at all times. Maybe look at some of the alternatives out there and practice your draw, either with an airsoft gun or on a range that will allow you to do that before you have to use it to defend your life.

As always, stay safe and have fun out there. We’ll see you on the range.