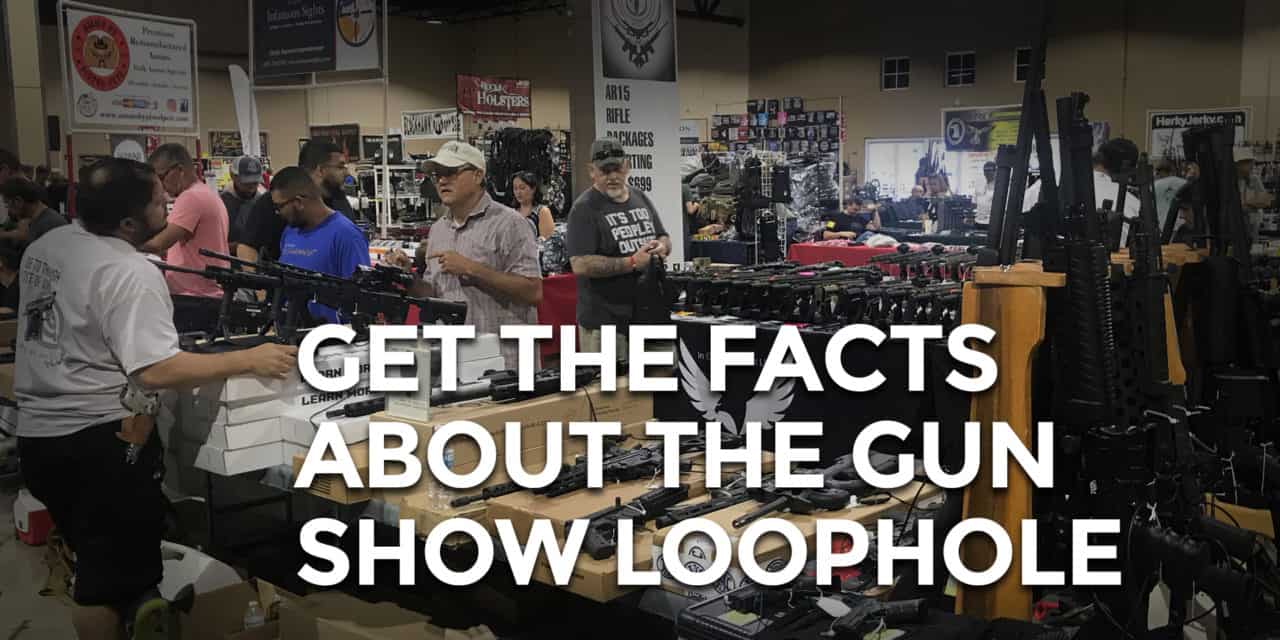 What Is The Gun Show Loophole?

As we near yet another election season, we hear once again how politicians want to ‘close the gun show loophole.” Like most political promises, it’s a catchy thing to say. Yet the facts about what the “gun show loophole” really is are hard to find.

A prominent gun control group has this rather lengthy explanation: “The Gun Control Act of 1968 requires anyone engaged in the business of selling guns to have a Federal Firearms License (FFL) and keep a record of their sales. However, this law does not cover all gun sellers. If a supplier is selling from his or her private collection and the principal objective is not to make a profit, the seller is not ‘engaged in the business’ and is not required to have a license. Because they are unlicensed, these sellers are not required to keep records of sales and are not required to perform background checks on potential buyers, even those prohibited from purchasing guns by the Gun Control Act. The gun show loophole refers to the fact that prohibited purchasers can avoid required background checks by seeking out these unlicensed sellers at gun shows.”

The key phrase in that explanation is that “prohibited persons can avoid required background checks by seeking out these unlicensed sellers at gun shows.” (Emphasis added). “Can” means it’s possible for unregulated sales to felons and other prohibited persons to occur at gun shows. But does this actually happen? Are gun shows the hub of illegal gun transactions that gun control groups would have us believe they are?

Do You Need A License To Sell A Gun At A Gun Show?

That depends. If you’re setting up a booth at a gun show to sell guns and make money from doing so, then you need a Federal Firearms License (FFL). Having an FFL means that all your gun sales require background checks and all your inventory is under the watchful eye of the Bureau of Alcohol, Tobacco, Firearms and Explosives.

However, if you show up at a gun show just to see what’s available, and you have a gun that you want to sell, you can sell it to someone else in a face-to-face transaction without the need for an FFL. This is the same as selling an old gaming console to someone you meet at an electronics show. It’s the type of private exchange of goods that has been around as long as human civilization. This is the type of sale people refer to when they talk about the “gun show loophole.” People who want to buy guns go to gun shows, and private citizens who have guns to sell also go to the gun shows because that’s where the buyers are.

Can You Sell A Gun Without A Background Check? 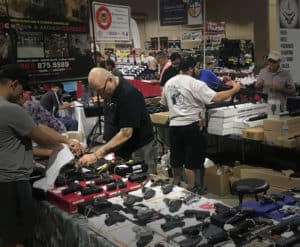 It depends on where you live. In some states, like Florida, you can sell a gun face-to-face without a background check. In others, like Colorado, you must conduct all purchases at a licensed firearms dealer and have the dealer conduct a background check. With a successful sale on the line, you would think that most gun owners wouldn’t care if the person buying their gun can pass a background check. But you’d be wrong.

A recent study by the General Accounting Office sought to prove that it was easy to buy a gun on the internet if you cannot pass a background check. Not only did the researchers fail to prove that gun owners will sell to anyone, they actually proved that gun owners are ready and willing to turn shady buyers over to law enforcement for further investigation:

“Tests performed on the Surface Web demonstrated that private sellers GAO contacted on gun forums and other classified ads were unwilling to sell a firearm to an individual who appeared to be prohibited from possessing a firearm. Of the 72 attempts agents made to purchase firearms on the Surface Web, 56 sellers refused to complete a transaction: 29 sellers stated they would not ship a firearm and 27 refused after the disclosure of the undercover identities’ stated prohibited status. Furthermore, in 5 of these 72 attempts, the accounts GAO set up were frozen by the websites, which prevented the agents from using the forums and attempting to make a purchase.” (Emphasis added).

We know that licensed dealers at gun shows need to run background checks. We also know that private sellers tend to refuse to sell to people who can’t pass background checks. So one question remains: do large numbers of crooks actually go to gun shows to take advantage of the “gun show loophole?”  The answer is “no.”

According to a 2016 study by the Department of Justice’s Bureau of Justice Statistics, less than 1% of guns used by criminals are purchased at gun shows. By comparison, almost twice as many guns were obtained by criminals through burglary. Too bad politicians aren’t talking about closing the “smash and grab loophole.”

So What Is The Gun Show Loophole?

In 1991, long before any other state was considering banning the private sale of guns, California implemented universal background checks. All gun sales in the Golden State had to be conducted at a licensed firearms dealer, and the buyer had to pass a background check before the sale could be completed. Did crime rates in California drop because they banned private gun sales? Not according to a recent joint study by the Johns Hopkins Bloomberg School of Public Health and the University of California at Davis Violence Prevention Research Program.  That study compared annual gun suicide and homicide rates in the 10 years following implementation of California’s law.  It compared California’s rates against 32 control states that did not have such laws. Interestingly, the researchers found “no change in the rates of either cause of death from firearms through 2000.”

So much for that idea. Even Politifact agrees that the “gun show loophole’ doesn’t exist. If you hear someone toss that phrase around in casual conversation, ask them what they think it means and how much of a problem it really is.  They probably have no idea.

Politics is a dirty business. The better we do at cleaning up the falsehoods being forced on us by people seeking power, the closer we will come to a government of the people, by the people, and for the people. Support the Second Amendment, one (legal) gun purchase at a time.