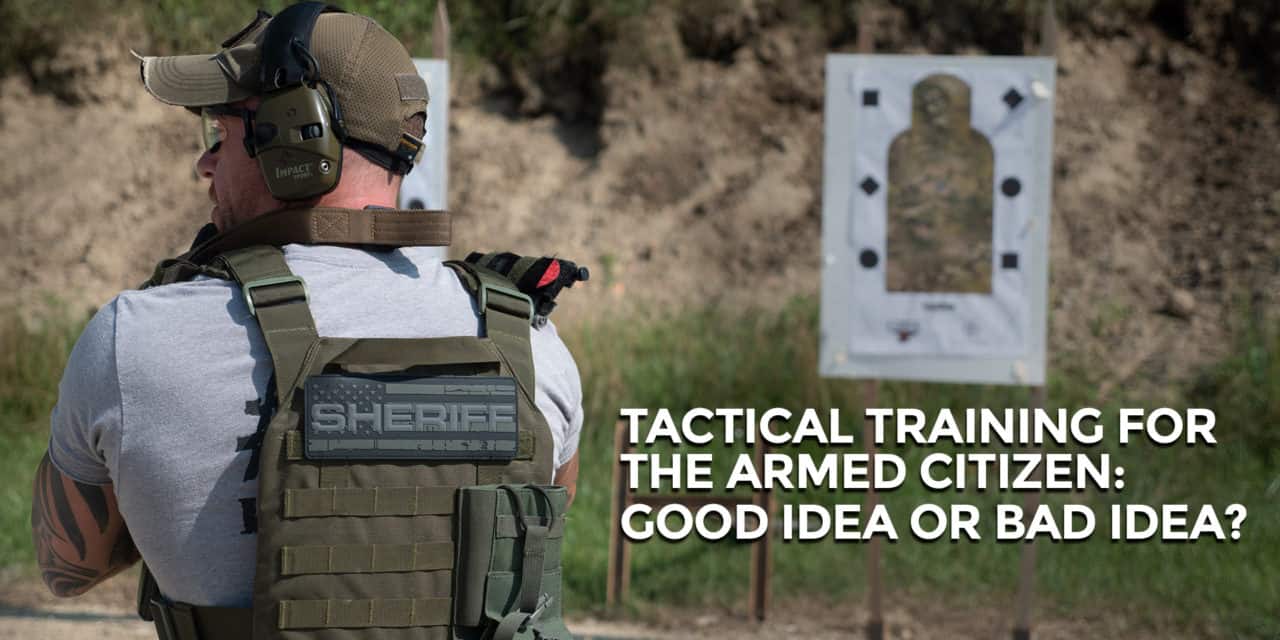 Is Tactical Training Right For The Armed Citizen?

In my previous career as a blogger, I gained a measure of notoriety for decrying so-called “Tactical Training” for the average civilian gun owner. You know the type of training I’m talking about. It’s normally advertised with videos featuring image after image of men in plate carriers bailing out of trucks, forming a stack outside of a door, and rapidly entering a structure. The soundtrack for the video is usually high-energy heavy metal music. All the while, the instructor’s credentials as a high-speed, low drag operator are highlighted as the reason YOU need to take this course RIGHT NOW So you can defend yourself, your loved ones, and your freedoms. 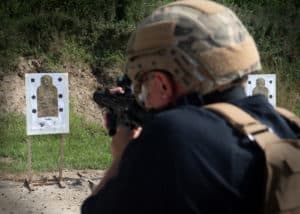 Well, no. That’s not really what most of us need.

The goals of the military are quite different than my goals as an armed citizen. I don’t have any need to conduct military operations on urban terrain, or on any terrain, for that matter. My goals are much more focused. As a parent and responsible gun owner, my primary duty is to defend the lives of my loved ones and keep myself safe. I have little need to assault a position or call in a mortar strike.

This also applies to the goals of law enforcement. I don’t need to search for suspects. I (thankfully) don’t have to arrest anyone. Law enforcement’s job is not my job. While I am concerned about the safety of my community as a whole, my concern for my family comes first.

This leads us, once again, to the question of how tactical training fits into my needs as an armed citizen. So much of the training out there has been built from the ground up to serve the needs of military and law enforcement.  Adapting that training to serve the needs of the armed citizen can be a challenge. There is very little chance I’ll ever need to lay down suppressive fire. And, once I’ve chased a bad guy away, the police are the ones with the resources to arrest him, not me.

What To Look For In Tactical Training

So what would make a good “tactical training” class for the armed citizen? Let’s begin by considering the environments where we live and work.

“I’m going to the grocery store tomorrow, not Khandahar.”

Let’s also consider our mission. We are not here to liberate a foreign country. I have no interest in raiding a meth lab. I’m going to the grocery store tomorrow, not Khandahar. Given those parameters, some sort of close-quarters training makes sense, especially if it is something that has an element of low-light training in it as well.

I was very pleased to discover that the three-day Carbine/Handgun Shoothouse course put on by Alliance Police Training provides exactly that. Rather than start from an accepted method of performing Close Quarters Battle (CQB) for military and law enforcement and then trying to reverse engineer that procedure to apply it to the armed citizen, this course starts off with a specific set of principles and goals for CQB. Then, each individual applies them to his or her specific role in society. 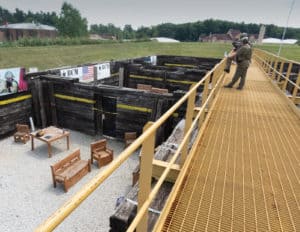 The view from the catwalk shoot house. Yes, it was completely safe, and very informative.

Even though some of our country’s most elite units train at this facility, the Carbine/Handgun Shoot House class was completely applicable to my life as an armed citizen. Class began with some basic marksmanship drills to make sure our short-range holdovers were correct.  This was followed by extensive classroom time on how to conduct ourselves and how to stay safe on the range while moving around in close quarters, engaging (and not engaging) targets with a spray of .223 ammo courtesy of the AR-15 in my hands.

Where this class was different from many other classes I’ve taken is in how the principles and goals for the class (in this case, close quarters battle) were taught and learned long before the range time started. The purpose of the class wasn’t to make us good at moving through structures while holding a rifle. Rather, the purpose of the class was to help lay out our priorities in the fight and how to conduct the fight effectively in a closed environment.

The tactical training in this class wasn’t “Ok, let’s start with opening doors, and then we’ll explain why we do it this way.” It was, “Let me explain what our goals are, then we’ll show you how to achieve them.”

Classes like the one I took emphasize the principles and concepts of how to use an AR-15 or similar long guns in a defensive situation. These principles can be universally applied to both the armed citizen and the high-speed operator alike, so they are the sort of tactical training that’s right for the average gun owner.

If you’re considering a class that talks about how to do close quarters battle “just like the Navy SEALS do it!,” it’s probably not the right class for you. Better that you enroll in a class that starts with a blank sheet of paper than attend a class that somehow tries to make training developed for the military backwards-compatible to the armed citizen.