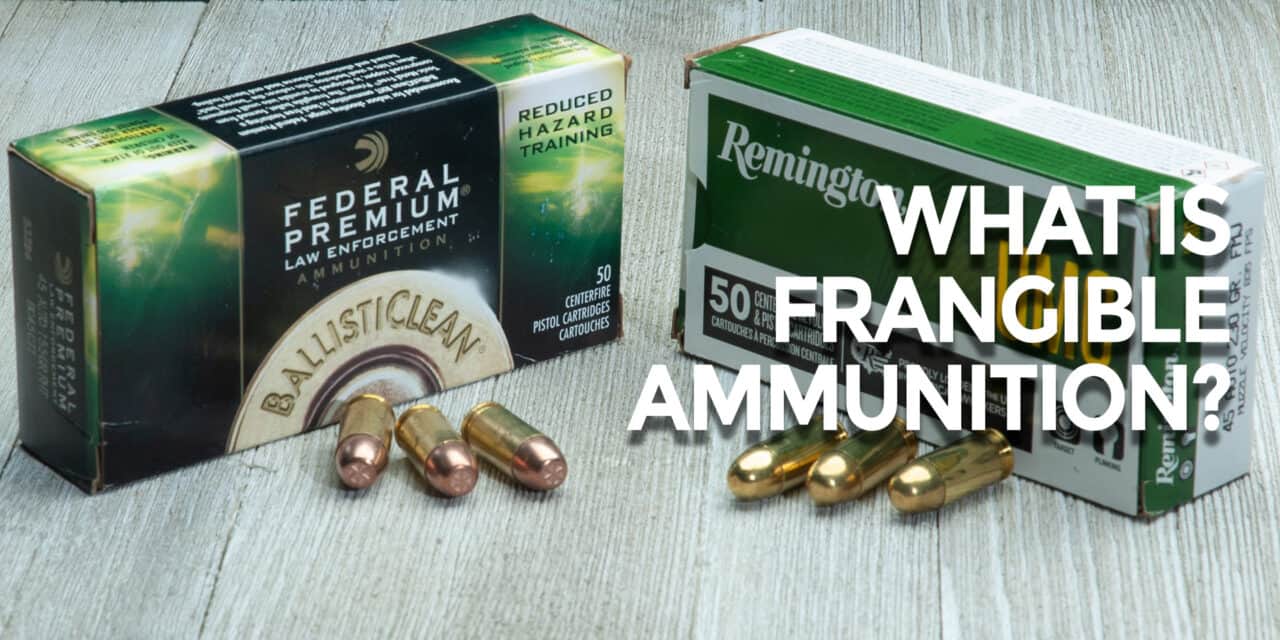 What Is Frangible Ammunition?

I recently returned from a well-known firearms training school that included a “shoot house” element in their coursework. To pass the course, I needed to engage targets inside a stoutly-constructed building. The school mandated that I use frangible ammunition for this part of the course. Plain old FMJ ammo was fine for everything else.

This made me realize that there might be a lot of people out there who don’t know what frangible ammo is, or what it’s used for. There are some instances where frangible ammo makes sense, such as the close quarters of a shoot house. There are lots of other times when you should use other ammo.

First, let’s talk about how most ammunition is constructed. Both full metal jacket (FMJ) and jacketed hollow point (JHP) ammo are built using a molded soft metal core (usually lead) that is wrapped in another metal, usually copper. JHP bullets have a little divot in the nose (hence the term “hollow point”). This hollow space is designed to expand open on impact, slowing the bullet down and dumping the bullet’s energy into the target. This expansion (and the damage it causes) is what makes JHP bullets especially effective for self defense and hunting. 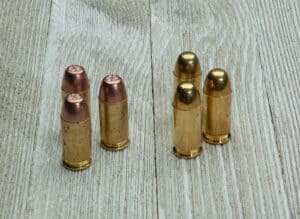 Frangible .45ACP on the left, FMJ on the right

FMJ bullets, on the other hand, are not designed to blossom on impact. Because they don’t have an opening in the nose of the bullet, they tend to punch right through the target. This gives FMJ rounds better penetration into the target, which can be a good thing when dealing with lower-powered calibers like .22 long rifle. However, they don’t dump their energy into the target as well as JHP bullets do. Therefore, they shouldn’t be your first choice for a hunting or defensive round.

Frangible ammo is different from both FMJ and JHP ammo in that it’s not molded out of a metal. Rather, frangible ammo is made from densely-packed metal dust. Have you ever squeezed sand together on the beach so it holds its shape after you let go? Frangible ammunition is like that, but with metal instead of sand. The grains of metal (usually copper) inside a frangible bullet are squeezed together so tightly that they form a solid mass that can withstand the pressure of being shot out of a gun. However, because they are made from tightly-packed metallic dust, they burst into a cloud of dust when they run into something solid.

What Frangible Ammo Is Used For

Frangible ammunition’s unique ability to turn itself into a cloud of dust when it hits something hard is one of the reasons we use it in firearms training. It’s also pretty much lead-free because it’s usually made from pressed copper or a similar metal.

The lack of lead in the bullet is a big advantage for ranges that have people moving in and around locations where a lot of rounds have headed downrange. Ingesting lead into the bloodstream has nasty health consequences, so much so that OSHA requires employees at indoor gun ranges to have their lead levels tested on a regular basis. Lead-free frangible ammunition solves that problem. It also makes cleanup of outdoor ranges a lot easier.

Another big advantage of using frangible ammo to train is how it disintegrates when it hits a solid object. FMJ and JHP ammo both tend to send jagged shards of metal flying every which way after an impact. This can lead to a dangerous situation in some environments, especially where close-quarters combat is taught. Frangible ammunition allows targets to be engaged at close distances with live ammo, at a greatly reduced risk of injury to the student or a bystander.

We created a test to show the difference between a frangible round and FMJ round hitting a solid target. Our test involved setting up a standard steel plate and then setting two cardboard steel targets on either side of it to catch any ricochets coming off the plate. We then shot at the target with three rounds of 155 grain .45 ACP Federal Ballisticlean frangible ammunition, and then again with three rounds of 230 grain Federal .45ACP FMJ ammunition.

The .45 ACP frangible had almost no effect on the targets to each side. There was some slight dimpling of the cardboard from the high velocity copper dust hitting the target, but other than that the cardboard was intact, with no rips, tears, or holes punched into it.

The .45 ACP FMJ, on the other hand, turned the cardboard targets into a horror show. The targets were ripped up by chunks of lead and copper from the bullet ricocheting off the steel. Pieces of the bullet were even found embedded in the cardboard itself. Imagine if that had been you standing next to that target. If you’re lucky, you’d be cut to shreds. If you’re unlucky, well, let’s not go there.

Useful, In The Right Situation

Frangible ammunition is a useful training tool with a specific purpose: to cut down on the side effects of a bullet impacting a hard surface. Because it is designed to shatter on impact, it is probably not the best defensive round on the market today. Also, its special construction means it costs more than full metal jacket practice rounds. But for situations where you need to train in close quarters or where lead contamination is a real problem, frangible ammunition fits the bill nicely.