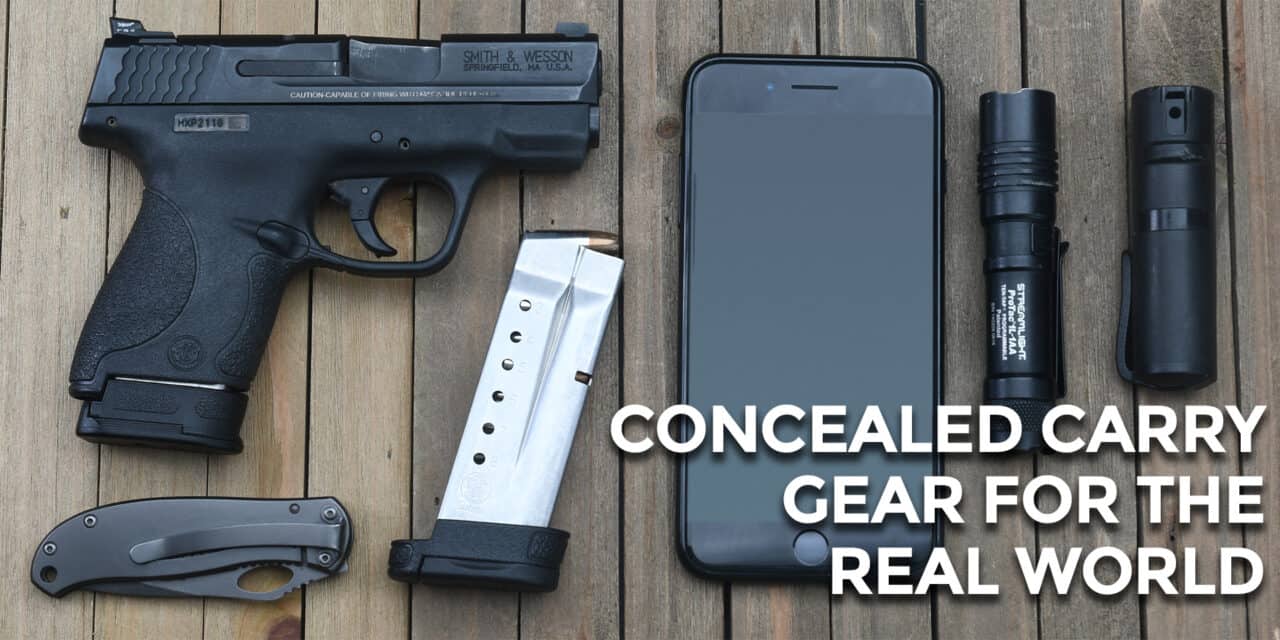 Making the choice to carry a gun on a regular basis is a very big decision. You’ve realized, along with a growing number of people, that there may not be a policeman around when you need one, and you’ve concluded that you have the temperament needed to safely carry a gun. While carrying a gun is the first step, it is by no means the only item of concealed carry gear that can help you lead a happier and more secure life. Let’s talk about a few of the things that might smooth out some of the bumps in your concealed carry journey.

A Safe Means to Store Your Gun

“Safe” is a relative term. If you live alone or with stable, properly trained adults you can trust, “safe” might mean keeping a loaded pistol on the nightstand when not on your person. I live in Florida, though, and I have two teenaged sons. The law here states that all firearms must be kept secured from their prying, underage hands. As such, I keep my guns locked up when not in use, and my concealed carry pistol is either on me or is in a quick-access safe at my bedside. A few years ago, I wanted to see how fast I could get to a gun inside a quick-access safe if I really needed it. To my surprise, it was literally just as fast to pop open a safe and grab my gun as it was to rummage through my sock drawer.

Spare Magazines For Your Pistol

Pistol magazines get slammed into a gun and dropped onto the ground over and over again. Because of this, I consider them to be disposable items. Three extra magazines are, for me, the bare minimum to have on-hand for any pistol that I own. More magazines, though, are always better.

This is a no-brainer. A pistol without ammunition is just a paperweight. Yes, you can get better at some pistol techniques with dry fire, but at some point the rubber will need to meet the road and you’ll need to send rounds down range.

In addition, I’m always amazed at how many people buy a defensive pistol and then don’t buy defensive ammunition for it.

Quick ammo primer: There are essentially two types of ammunition for handguns; solid full metal jacket bullets (FMJ), which are most commonly used for target practice and plinking, and jacketed hollow-point ammunition (JHP), which expands on impact. JHP ammunition is typically used for hunting and self-defense. In general, you want to use hollow points in a defensive gun because they increase the wounding power of a pistol round, which increases your chances of stopping a threat with fewer shots. However, smaller caliber guns (.380ACP or less) typically don’t have enough power to penetrate deep enough to cause sufficient damage to stop a threat, so choose your ammo carefully.

Whatever brand of defensive ammo you choose to use in your defensive pistol, make sure it runs smoothly and reliably. Not all bullets are shaped the same, and minor variations in the curve of a round or the depth of the hollow point on the nose can have a big impact on your pistol’s reliability. Shoot at least two boxes of your defensive ammo of choice just to make sure it will work when you need it the most. 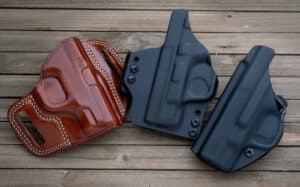 Note that I said “holsters,” not “holster.” You don’t own just one pair of shoes, do you? Same thing with holsters. You’ll find out early on in your concealed carry journey that just one holster won’t suffice. This is especially true if you take a class with your concealed carry gear. A good firearms class, one that has you drawing from the holster, will quickly show you what does and does not work with your holster of choice.

In addition to this, you should get a good gun belt to hold everything on your waist. A good gun belt is one that is thicker, stiffer, and harder to twist than a dress belt or even a work belt. This stiffness allows the belt to be rigid on your waist and distributes the weight of your gun around your body. This, in turn, makes your gun easier to carry, which means you’ll carry more often.

A less lethal option is an absolutely vital part of your concealed carry gear. Whether it’s pepper spray or something else, you really don’t want to face a non-lethal threat with lethal force. While I’m not a lawyer, it makes sense that because we face a wide variety of threats, you want a wide variety of responses to those threats available to you. Going to your gun first, in every situation, is probably not the best way to stay out of jail.

The sharp edge on a piece of chipped flint was one of our very first tools, and a sharp edge is still useful today in many ways. I carry a knife whenever and wherever it is permissible by law. In more formal situations, I have a small little penknife as part of my concealed carry gear. I carry a larger folding knife in more casual situations. In addition, I usually have a small fixed-blade knife carried on my waist that I can access quickly with either hand. That knife isn’t there to open boxes or cut cheesecake, it’s there to defend my life in a desperate situation. If I need that knife, I’m probably going to need it rather quickly, which is why it’s a fixed blade and not a folding knife. 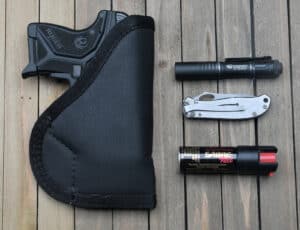 Even when you’re carrying in deep concealment, you can still carry the gear you need.

Do you want to avoid becoming a victim in a scary place on a dark night? Have a flashlight with you and turn it on when things get dark and dicey. Carrying a flashlight and using it to light up your way sends out a clear signal to any crook nearby that you are not a victim. Look at it from a crook’s perspective: In their world, there are two types of people who carry and use flashlights, police and security guards. Anything you can do to make yourself look less like a victim and more like trouble for a crook is a good thing. Shining out a bright light means you know what’s going on around you and you have the tools to deal with it as well.

I’ve carried a tourniquet on me for years. When I mention this fact in online forums or on social media, people assume my reason for carrying it is to use it on the bad guy who just attacked me.

I find their reasoning quite interesting. It’s as if they assume that the only person who will ever be injured in any lethal force encounter will be the bad guy. I understand that, yes, that is the ideal we’re training for. Personally, I’m hoping for no lethal force encounter at all, but I understand that’s not always up to me to decide. The fact is, the world is full of people, and while my accuracy may be up to the task of stopping an attacker, I have no guarantees about their accuracy. If a stray round hits a loved one, that would not be an optimal outcome for me in the least.

Have at least one tourniquet within easy reach at all times. The life you save may be your own.

The modern smartphone is a communications miracle that fits in your hand. It is also an essential part of your concealed carry gear. It can summon 911, and it can call your lawyer if needed. In really nasty situations, text messages can go out to summon help when voice calls can’t go through. It has a camera to document everything that goes on in your life, such as minor traffic accidents and other situations. A smartphone is so useful, even without a cell connection, there is no real reason not to have one with you at all times.

Go out and live your life, and stay safe while you do it. But most of all, have fun. After all, the point of carrying this gear isn’t to make you afraid or turn you into some caped crusader who is dedicated to keeping the streets of your town safe. Rather, the point of your concealed carry gear is to allow you to enjoy your life with a minimum of messy interruptions.