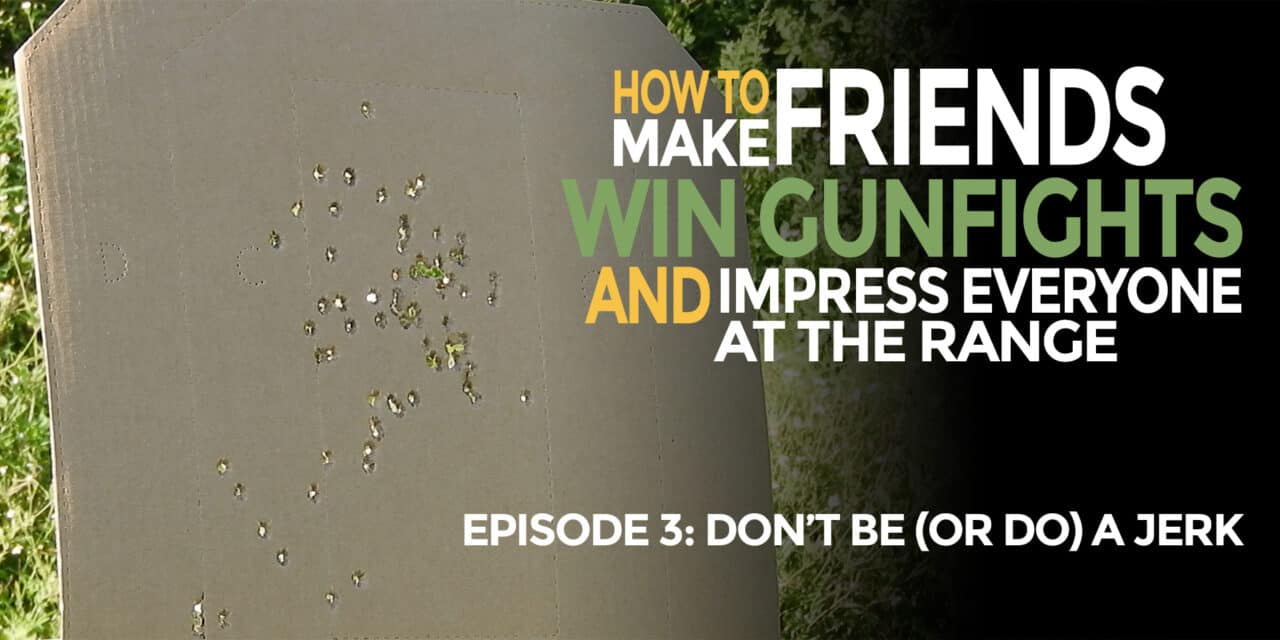 What Do We Mean By “Jerking The Trigger”

To be honest, I’m not that big of a fan of the phrase “jerking the trigger.” It has become a bit of a catch-all phrase for “I’m shooting low and left, and I can’t figure out why.” Let’s begin with the obvious: The sights on your pistol are set properly, and it’s not because of the ammo you’re shooting either. Chances are, you’re simply impatient and you’re rushing to take the shot, as World Champion pistol shooter Rob Leatham will now explain.

Rob makes a great point here: What we call “jerking the trigger” is most likely a reaction to seeing the sights line up on the target and not waiting for a smooth trigger press to happen. “Ah-ha!” we say, “There’s the sights, there’s the target, everything looks good, so that means I have to take the shot RIGHT NOW!!”
And then the shot goes low and left. Over and over again. Let’s talk about why this happens.

We Aren’t Controlling The Pistol Enough

Call it “gripping the gun” or whatever you like, but one of the biggest reasons why your shots are going low and left is that the 4 to 12 (or more) pounds of pressure needed to pull the trigger is throwing your sights off the target. At first glance, this doesn’t make a lot of sense, as human beings have an average grip strength of 25 pounds or more. Yet we’re allowing the 6.5 pound trigger on a Glock to throw our sights off-target? What is wrong with us?
What’s wrong is that we are mistaking being able to hold a pistol on target with being able to grip a pistol so it doesn’t move as we activate the trigger.

We Don’t Trust Our Sights

We’re In A Hurry

You may have noticed I’m using words like “we” and “us” in this post. That’s because I’ve had problems with jerking the trigger since I started shooting. I see the sights line up on the target and think to myself, “Okay, I have just an instant to take the shot, and it has to be NOW!” Naturally, my shot then goes low and left. My finger moves too quickly on the trigger, and my grip isn’t (or rather, wasn’t) strong enough to prevent my sights from being yanked off-target. There went my shot, low and left.

Shooting groups is the beginning of marksmanship, and getting over jerking the trigger is a good way to tighten your groups

For me, slowing down, even for a fraction of a second, went a long way towards solving my problems with jerking the trigger. I was seeing the sights on my target, but my urgency to make the shot RIGHT NOW was overriding everything else. Getting rid of this problem took three separate steps.

Our fingers don’t move of their own accord. They move how the brain tells them to move. A few years ago, Jeff Street of Step By Step Gun Training gave me a very effective piece of advice about this topic.

“Get your sights lined up on target, and then, rather than thinking about pulling on the trigger, imagine pressing your trigger finger into the center of your chest.”

There is a reason why almost every pistol instructor on the planet recommends dry fire practice, and that’s because it works. Watching your front sight move (or not move) as you press the trigger to the rear can be done with or without ammunition in the gun. With dry fire, we’re not looking to see how we handle recoil or where the holes appear in the target, we are concentrating on one specific skill.

I have a special part of my house dedicated to dry fire practice. In order to minimize potentially catastrophic errors with the rules of gun safety, I make sure there is no live ammo in the room. I safely clear and empty any gun I’ll be using for dry fire practice, and then visually and physically check to make sure the gun is unloaded.

There are many different dry fire drills out there. There are even books dedicated to effective dry fire practice. All of this is due to one thing: dry fire works, and it is especially helpful when it comes to jerking the trigger. The specific drill we’ll be talking about today is the Wall Drill, designed to help you see your sights as you are moving the trigger.

Shooter stands with muzzle at eye level less than one inch from a blank wall. There should be no aiming points (targets, holes, light switches, etc.) to distract the shooter.

Shooter practices proper sight alignment, front sight focus, and trigger manipulation without the distraction of a target. Two-hand, strong-hand, and weak-hand shooting should be practiced. For TDA (traditional double action) pistols, both the double- and single-action trigger pulls should be practiced.

The goal is to maintain focus on the front sight, pulling the trigger without upsetting sight alignment.

Yes, this sounds boring. Honestly, compared to the fun of having your pistol go “BANG” and making a hole in the target, dry fire is rather boring indeed. However, developing a dry fire routine — especially one that focuses on trigger manipulation — is the fastest, easiest, and least expensive way to get over jerking the trigger.

The Now Drill is a simple yet effective way to get over jerking the trigger. This drill takes the techniques learned during dry fire and applies them to live fire.  It allows us to develop the skill of making the shot on-demand while seeing our sights as we press the trigger.

Affix an 8 inch paper plate to the center-chest area of a silhouette target, and set the target up at 7 yards. Load your pistol to capacity and aim it at the center of the plate with your finger on the trigger.
On the signal “Now!” press the trigger to the rear while keeping the sights aligned on the target. The “Now!” signal can be any number of things, either a shot timer, another person, or even something as simple as saying to yourself “Now!” Ideally, there should be less than a second of time between the command “Now!” and the shot appearing on the plate.
The goal of this drill is to put all your shots onto the plate with as little time as possible passing between the command “Now!” and the gun firing.

The target will tell you if you’re rushing the shot and not watching the sights.  If you see the telltale sign of holes suddenly appearing low and left, then you know you’re jerking the trigger.

I wish I could tell you “The one weird trick to stop jerking the trigger,” but the fact is, getting rid of this bad shooting habit takes time, practice, and effort. Realizing what’s happening on your target and then committing to dry fire practice and making regular trips to the range with a purpose in mind are the three biggest steps you can take to go beyond jerking the trigger and becoming a confident, skilled pistol marksman.