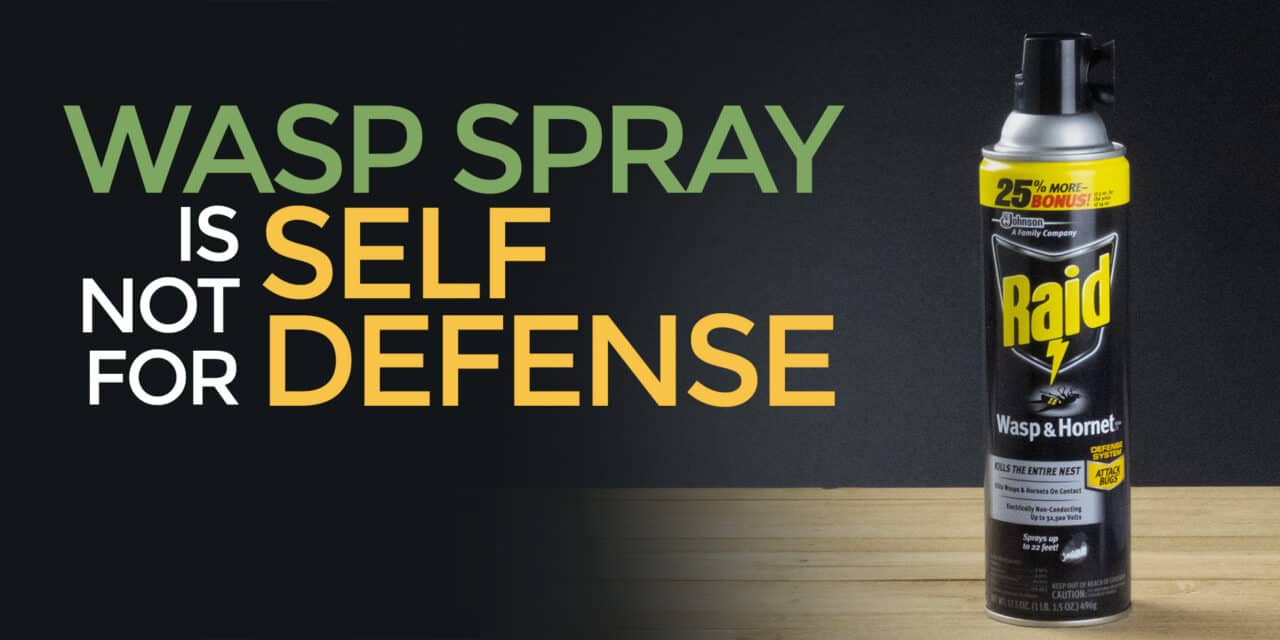 Don’t Use Wasp Spray For Self Defense

If you spend time on social media or in online forums devoted to firearms, you’ll probably hear people talk about less-lethal means of self protection. Some people will suggest that you shouldn’t worry about such things because you have a gun. Others will suggest that you should carry something like a high-powered tactical flashlight (not a bad idea, actually). Sooner or later, though, someone will inevitably suggest you use wasp spray for self defense.

Not only are those people wrong, they are making a bad situation even worse.

Self Defense Is Like An Onion. It Has Layers.

To begin with, you should not expect that owning a defensive firearm is the be-all, end-all of your personal protection needs.

I’m not a lawyer, and this is not legal advice, but pretty much everyone agrees that lethal force (such as using a firearm) should only be used “in the gravest extreme.”

In other words, guns are only for situations where your life or the lives of others would be suddenly over or take a turn for the worse (really, really, REALLY worse) if a gun is not used. Anything else requires a little more subtlety.

That brings us to the (bad) idea that wasp spray, hornet spray, or some other insect spray is an effective means of less-lethal self defense. You want something that is effective yet lies somewhere between mere harsh words and a gun, as noted lawman and firearms trainer Chuck Haggard would say (more about him later).

But not wasp spray. Wasp spray, hornet spray, and other insect products are not meant for self defense. They are meant to kill bugs. Their active ingredient isn’t the capscium found inside a can of pepper spray. The active ingredient in wasp spray is a mild neurotoxin. In other words, the stuff you’re spraying out of a wasp spray can isn’t meant to stop or incapacitate an attacker. It’s meant to kill small insects. Any effect it has on humans is merely incidental to that goal.

Think about it: Have you ever seen a law enforcement officer walking around with a can of wasp spray on their belt? No. There’s a reason for that. It’s because wasp spray is terrible for self-defense.

In order to get a better perspective on what does and does not work when it comes to less-lethal sprays, I reached out to Chuck Haggard of Agile Training and Consulting. Chuck is a career law enforcement officer and an expert on the use of pepper spray and other less-lethal means of self defense. He teaches a highly-regarded class on pepper spray for the armed citizen. His ideas have turned me around 180 degrees when it comes to less-lethal options for the everyday person.

“First off, let’s face facts. Wasp spray cans are huge. You are not going to carry them around with you outside your house. So even if they were effective, you won’t have it near you when a mugger attacks,” Haggard said. 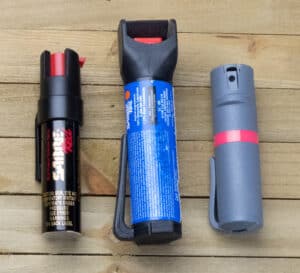 Unlike wasp spray, all of these cans of pepper spray will fit into a purse or a pocket.

“Secondly, wasp sprays are made from organo-phosphates. They are, in reality, a very, very weak form of nerve gas that’s designed to be effective on bugs, not humans. Look at areas where you can’t carry guns, what do people recommend there for defense against bears and aggressive animals? It’s not wasp spray. It’s bear spray, which is very, very similar to the OC spray you put in a purse or in a pocket.”

“Thirdly,” Haggard continued, “Wasp spray is ineffective for self defense. When I was with the Topeka Police Department, I had a co-worker respond to a call where a woman used wasp spray on an attacker. She was able to run away, but the attacker chased her down and caught up with her. He continued his attack, and in fact sprayed the rest of her can of wasp spray in her face before departing.”

“Finally, and most egregious, are the people who suggest that teachers should have a can of wasp spray at their desks in case of an active shooter. Not only does it not work, but there’s a better alternative out there: the dry chemical fire extinguisher. That type of fire extinguisher blasts out a fine powder that’s almost like talcum powder. When you blast it into an attacker’s face you blind them, and that fine powder can cause serious respiratory distress if inhaled into the lungs.”

The idea that wasp spray works as a self defense tool is one of those things that just won’t go away. The fact is, though, that you won’t see a can of wasp spray on a policeman’s belt next to their duty pistol and backup mags. Rather, you’ll see a can of pepper spray.

Cops don’t rely on wasp spray to stop a suspect with less-lethal force; they rely on pepper spray. Quite often, it’s the same exact canister that you and I can buy online. Take a lesson from the professionals and carry pepper spray for self defense. Leave the wasp spray for the bugs — not the people — that bother you.