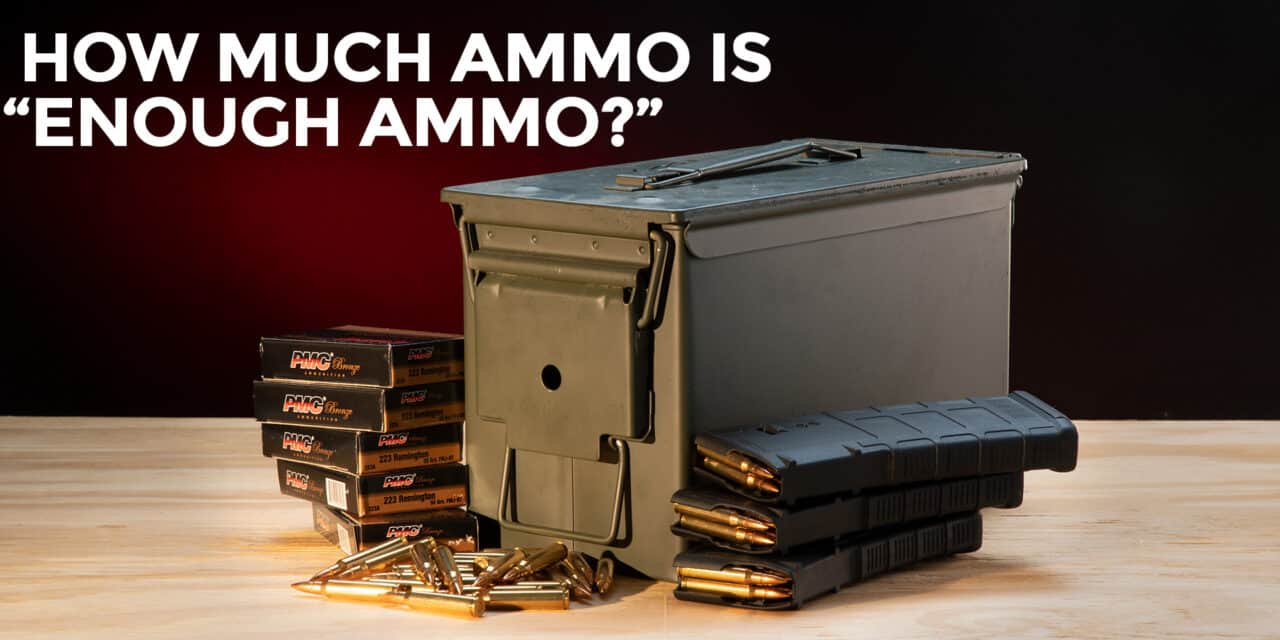 How Much Ammo Is Enough For When Things Get Really Bad?

In December 2019, the first cases of coronavirus, or SARS-CoV-2, were reported in the Wuhan province of mainland China. Despite the efforts of the Chinese government and other agencies, the disease spread around the world. Public health officials reported cases on every continent. Coronavirus has become a global pandemic, and it has already impacted on the global economy. This, in turn, can radically affect our lives here in the United States. Gun owners remember how guns and ammo were hard to find because of the political climate at the time. What will happen if it’s a pandemic that affects our ammo supply? What gear will be affected? As we here at Ammoman are in the ammo business, we’ll be looking at how a pandemic might affect your access to ammo. How much ammo do you need for a SHTF* scenario where the supply chain breaks down? How might it affect your ability to buy ammo and enjoy the shooting sports? Let’s take a look.

An Economic Crisis In The Making

China is an economic powerhouse right now, especially in electronics. From computers to cell phones to TVs to cameras, if it has a circuit board in it, chances are at least part of it was made in China. China’s efforts to quarantine the coronavirus have already impacted delivery of products for Apple and other companies. 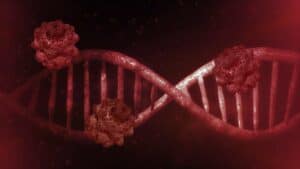 This dominance in high-tech manufacturing can affect gun owners in a number of ways. Many of the optics we use on our guns are built with Chinese components. Rangefinders, red dots, laser sights, and even the glass inside a rifle scope are all commonly sourced from Chinese manufacturers. The same goes for the batteries powering those items. If efforts to quarantine the coronavirus epidemic in China fail, that will probably impact your ability to buy accessories for your firearm of choice.

Things are different when it comes to ammo and guns. Due to an absolutely bewildering amount of federal regulations, the vast majority of guns and ammo we own are manufactured here in the United States. There are some exceptions, of course, such as some gun components and some ammo brands. For the most part, though, what we shoot in our guns (and the guns themselves) are made right here in the U.S. of A.

Commerce Could Grind To A Halt

A major problem with a pandemic inside the U.S. is that people don’t like to get sick. Most people will go to great lengths to make sure they don’t catch a potentially deadly disease, and that can affect the economy.

“The biggest driver of the economics of pandemics is not mortality or morbidity but risk aversion, as people change their behavior to reduce their chance of exposure. People don’t go to their jobs, and they don’t go to shopping malls. There can be a huge decrease in consumer demand, and if (a pandemic) continues long enough, it can affect manufacturing,”  says Dr. Dennis Carroll, director of the U.S. Agency for International Development’s programs on new and emerging disease threats.

Okay, let’s pause for a minute and apply that to ammo.

If people don’t want to go out shopping, that can radically affect the retail sales of ammo. Rather than go out and mingle with the potentially infected public, they will stay at home and order via computer. For an online retailer like Ammoman, that seems like a good thing. 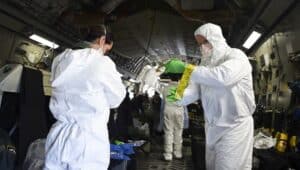 Let’s face it: Would YOU want to go to work, if you saw this happening in your town? Me neither.

And if I’m honest, it does. Right up to point where you realize some of those people staying home and not going to work are the people who make and ship ammo to Ammoman and other places that sell ammunition. Then things get weird. If people are not able to make or ship ammunition because of a medical emergency, the supply chain for ammo can get really tight, really quickly, just like it did almost 12 years ago.

Lessons From The 2008 Gun Buying Panic

Let’s look back at what happened in 2008. The supply chain for ammo dried up back then, but not because of global pandemic. American gun owners were nervous about the new leadership of our country. Year after year, we bought guns and ammo in unheard-of amounts. That led to shortages of guns and ammo that lasted for months on end. What we learned then can give us some clues about how much ammo is right for a SHTF scenario like a nationwide pandemic.

Before 2008, the conventional wisdom was that you wanted to make sure your guns were in common calibers like 9mm, .223 and 12 gauge. The idea was that those rounds are so common, they’ll always be available if you need them. Then the panic of 2008 hit and the demand for 9mm and other common rounds vastly outpaced the supply. I remember people lining up outside of local sporting goods stores on the day the weekly shipment arrived, hoping to get a chance to buy ammo. It got that bad.

I had as much difficulty as everyone else finding 9mm during these lean years, but I noticed something interesting. I couldn’t find 5.56mm, 7.62 NATO, and similar rifle calibers for love or money. However, I could buy .30-06 for my M1903A3 just about any time I wanted, in any quantity I wanted. The same was true for 9×18 Makarov ammo for my CZ-82. But .380 ACP for my LCP? Forget about it. The bottom line is, don’t suppose that just because the ammunition you shoot is commonly available now it will be commonly available when supplies get tight.

The amount of ammo you will need for a SHTF situation like a nationwide medical emergency depends on a number of different things. I am not a big fan of spending money you don’t have on items such as a huge stockpile of ammo when there are other pressing needs at hand. However, a healthy reserve of ammo for the guns you own is a pretty good idea, no matter what.

Here’s what I consider to be a minimum level of ammunition to have on-hand at any given moment.

Practice ammunition for both rimfire and centerfire guns usually means lower-cost bulk, full-metal jacket (FMJ) ammunition. Lower-priced birdshot rounds are good for practice and for both hunting and defensive purposes.

Specialty ammunition covers rounds like jacketed hollow point ammo (JHP), which costs more, but is more effective for defensive and hunting usage. Specialty ammo for shotguns can vary depending on the reason why you own a scattergun. For bird hunting, there are high end target loads. For deer and other game, there are slugs and buckshot loads. If your shotgun is primarily for defensive purposes, load up on slugs and buckshot. I’m a big fan of Federal Flite Control for this sort of thing.

You’ll note that I said “At least 100 rounds of specialty ammo” for a centerfire rifle. That recommendation is the bare minimum. If hunting is your reason to own a rifle, 100 rounds of hollow point ammo should be enough to start with. However, if you own a rifle for defensive purposes, 100 rounds of dedicated defensive ammo translates into just over three full magazines for an AR-15. That, in my opinion, isn’t enough ammo if you rely on an AR-15 to save a life. 300 rounds, or ten full magazines, is much more preferable for that scenario.

A Pandemic Probably Won’t Be The End Of The World.

Is there a pandemic in America’s future? Well, it has happened in the past and it just might happen again. Will coronavirus be that pandemic? I’m not an epidemiologist, so I can’t really say. Will a pandemic affect your ability to stock up on ammo? Probably. How much ammo is enough for a pandemic or SHTF scenario? I know a lot of people who have been in serious situations, and to date, not one of them said that they had too much ammo with them when their life was on the line.

* SHTF is short for, ah, “Stuff” Hits The Fan. Or something like that…