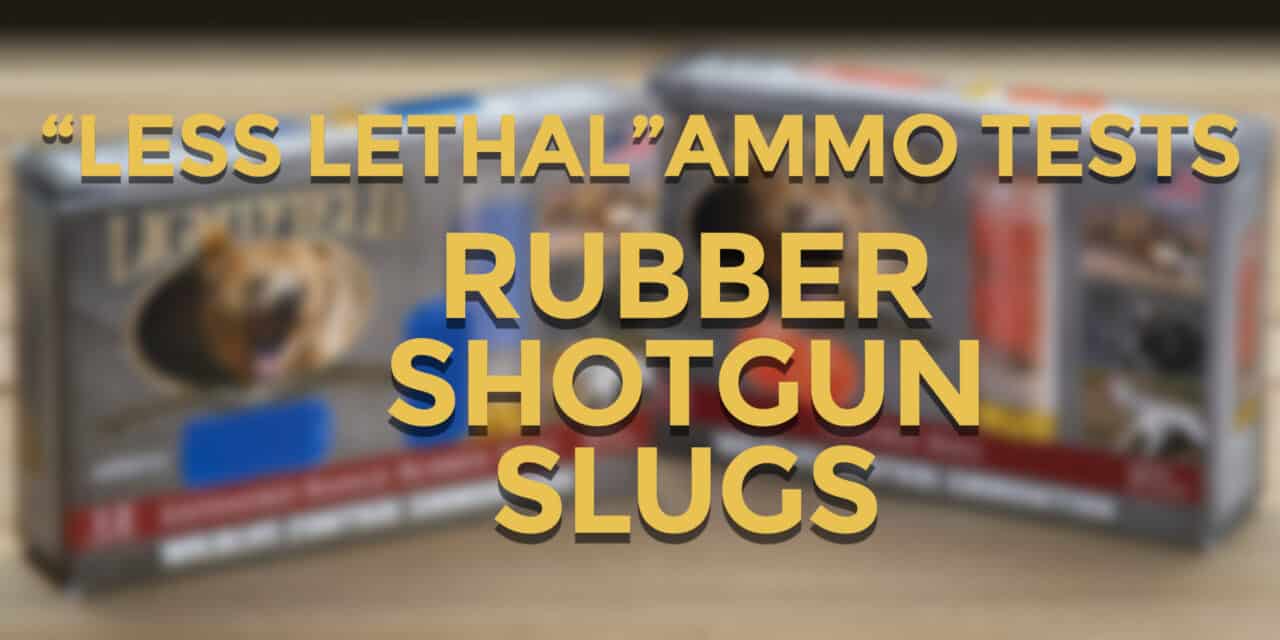 This Is Where The Rubber (Shotgun Slug) Meets The Road

It’s an all-too common sight on the nightly news. A ragged line of mostly peaceful protestors pushes through a cloud of tear gas and pepper spray. In front of them is a solid wall of riot control police, determined to halt their advance. The rioters rush towards the police with clubs and other improvised weapons, determined to break through. The police brace themselves. Suddenly there is the loud report of shotguns firing, and the firing line of protestors goes down. They are injured, possibly severely injured. They are not dead, however. Bruised and battered, they are out of the fight, due to the use of rubber shotgun slugs by the police.

Rubber or plastic shotgun rounds trace their roots back to 1970, when they were first used by British troops in Northern Ireland. Since then, they have gained acceptance by law enforcement and military units around the world as a way to deliver less-lethal force at a distance. While they are called “slugs” because they area solid projectile that travels through the bore of the shotgun in one piece, they are markedly different from deer slugs or other metal shotgun rounds.

What Are Rubber Shotgun Slugs Used For?

The boxes of the ammo we purchased for this test are both marked as “wildlife control ammunition.” I talked with some friends of mine who live in more rural areas, and they confirmed that they did in fact use rubber shotgun slugs and other “less lethal” rounds to scare off animals like bears, coyotes and such from their property.

When law enforcement uses less lethal ammo, it’s usually for one of two purposes. The first is to deliver a blow to a person who is violent, but is not using deadly force. Law enforcement uses less lethal ammo like bean bag rounds to stun the target or knock them down. Then, officers can close in and restrain the person. That’s the police’s job, to apply the rule of law to the general populace. That is not our job, which is to protect what is near and dear to us.

The second reason why rubber shotgun slugs come out is the aforementioned riot control. That’s where things change for armed citizens. It is not our job to quell a riot, it is our job to keep ourselves and our loved ones alive and free from the threat of grievous bodily harm. A violent mob, by its very nature, is a disparate force. It’s harder to defend against multiple attackers, and a large crowd threatening violence on you or a loved one represents a significant threat to your well-being. Once again, though, I have to tell you that I, surprisingly enough, am not a lawyer, and this is not legal advice. You want legal advice? Go to a lawyer. They get paid to do that stuff, I don’t.

Is Less Lethal Right For Us?

Let’s take a look at all of this together. We know that a) we’re never going to need to arrest somebody and b) a violent mob is a threat to our lives and c) lethal force can be used to counter such a threat.

So, why exactly do we need less lethal rounds like rubber shotgun slugs, anyways? If a mob is truly a lethal threat to us, then we should use lethal force. If it’s not a lethal threat, let them walk past and let law enforcement handle it, no matter how obnoxious the mob might be.

Now let’s see what rubber shotgun slugs can do on the rare occasion you might actually need to use them.

The Rubber Shotgun Slugs In Our Test Are… 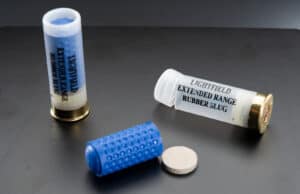 We’ll be looking at two different varieties of rubber shotgun slugs, both made by Litchfield Ammunition. The first is a solid rubber slug, approximately 1.5 inches long and 0.75 inches in diameter. The slug is very solid and is compressible only at the rear of the projectile. The outside of the slug is dimpled. This no doubt helps its aerodynamic properties in the same manner as golf ball’s dimples. There is a small fibrous disc at the bottom of the shell. It pushes the slug out of the barrel when you fire it. The slug itself weighs just one-third of an ounce, significantly less than the solid ounce of metal that’s inside a typical deer slug round.

The Double Ball round is also made from rubber. But rather than one cylindrical projectile, it contains two rubber balls. In this case, each ball is 0.75 inch in diameter. They both weigh 0.14 ounces. Just like the rubber slug, there is a small fiber disc at the rear of the shell that kicks the projectiles out when fired. The rubber slug has a velocity of 733 fps at the muzzle when fired from a Mossberg 500, which means it develops 167 ft/lbs of energy at the muzzle versus the 533 ft/lbs of energy from a Fiocchi reduced recoil lead slug.

This Is The Way The Rubber Ball Bounces… 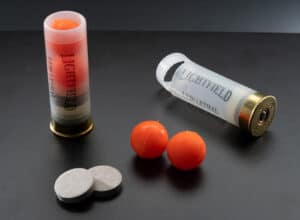 The double rubber ball round was even faster, producing 792 fps of velocity at the muzzle, which is as fast as the lead slug was going. It has a much lighter projectile, however, and only produces 84 ft/lbs of energy. However, that is a 60 grain aerodynamic projectile going at almost 800 fps. This combination of fast velocity and a smooth, rounded shape can have a dramatic effect on the target, as we shall soon see.

We tested these two projectiles the same way we tested rock salt rounds. We fired one round each into a block of clear ballistics gel from a distance of 15 feet. For the first round of testing, we’ll cover the gel with four layers of heavy cloth, an industry standard for measuring projectile penetration. We’ll do the  second test on bare gel. We’ll measure and record any penetration from both gel blocks.

The cylindrical slug had a significant impact into the gel, but did not penetrate four layers of cloth. It did, however, embed a few threads from the cloth into the gel itself. This gives us some idea of the thump that this round is capable of delivering on the target. On bare gel, the round drove over 2.5 inches into the testing medium. This is far short of the FBI’s recommended minimum of 12 inches of penetration for lethal ammunition. However, it could do significant amounts of damage to more sensitive areas of the body. Of course, the slugs might kill someone if you fire them at someone’s head.

The double ball round penetrated into the gel in both tests. However, only one ball did so in each test, and there was a slight difference in depth of penetration. The round penetrated the heavy cloth covered gel 1.25 inches and 2 inches into bare gel. The reason why one of the rubber balls penetrated the fabric while the rubber shotgun slug did not is due to two factors: The first is the shape of the projectiles themselves. The slug has a blunt, dome-shaped tip. It looks like it might distribute the impact of the round more than evenly than the round shape of the ball. This, I believe, led to the energy of the slug being soaked up by the fabric layers, while the circular ball round punched right through them.

Secondly, a ball is a more aerodynamic shape than cylinder. This means the slug lost more energy on its way to the gel as it plowed through the air compared to the ball round. The ball round most likely retained more of its velocity, and therefore had more penetration than the slug.

At 733 feet per second of velocity and 167 ft/lbs of energy, a rubber shotgun slug delivers a significant amount of force to the target. Based on our testing, it may not penetrate into the target through heavy clothing, but the bruise it leaves behind should be quite spectacular. Our testing showed it will penetrate when fired at bare skin, however, which should give you pause about using it on a live target. These are “less lethal” rounds, after all, and not “non lethal.” We suggest you use them with caution. Grievous bodily injury or death is a possibility with anything you shoot out of a firearm.

Double ball rubber rounds, however, penetrated into the gel no matter if there was heavy cloth in front of it or not. Given this fact, and the fact that there are other less lethal options available, I’d look at other solutions if you are needing something that will deliver a solid hit to your target, with a decreased chance of taking a life.