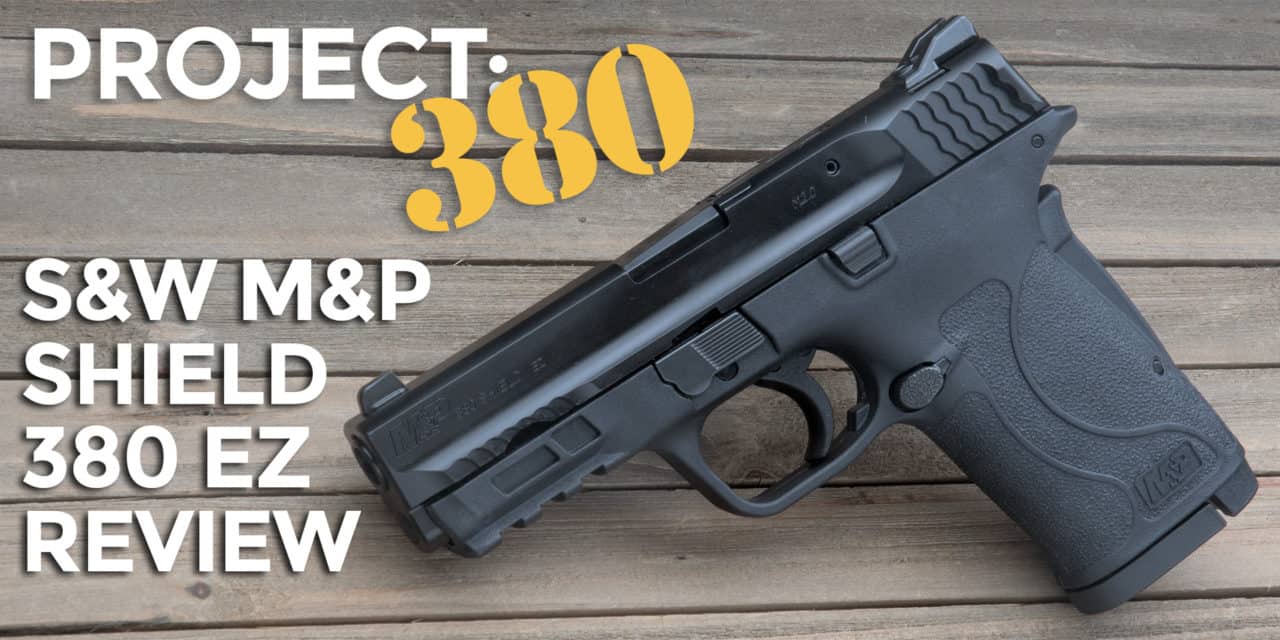 The Smith & Wesson M&P Shield 380EZ was released in 2018, and it quickly touched off a firestorm inside the firearms community. Sure, there were other compact .380 ACP guns before the M&P Shield 380EZ came out, such as the Ruger LC380 and the Walther PK380, but it was the 380EZ that made the gun writing community wake up and notice that there was a large swath of the market that wasn’t being served properly with the existing selection of pistols. So, we were excited to get our hands on it for this Shield 380 EZ Review.

The new M&P 380EZ Model 2.0 takes the look, feel, and features of Smith & Wesson’s popular M&P 2.0 lineup and turns it down a notch to work with the lower-powered .380 ACP cartridge. The result is a lightweight, easy to shoot pistol that in many ways defines the market niche.

At first glance, the 380EZ doesn’t stand out that much from the crowd. It’s not the lightest, nor the least expensive, and it doesn’t hold the most rounds. But, with an average trigger pull of just under 4.5 pounds, it has the best trigger of the guns we tested. The biggest advantage of the 380EZ is that it feels like it’s a bigger gun than it really is.

If you go into a gun store and pick up a Glock 19, a M&P Compact 9mm, and a 380EZ, your hand and brain won’t notice that much of a difference. Even though it’s a skinny .380 ACP pistol, the 380EZ is a compact pistol that feels like a larger gun in your hand. There are other features on the gun, like a comfortable grip, slide release lever that’s easy to reach without breaking your grip, and short length of Picatinny rail at the front which speak more of a full size 9mm than a compact .380.

Picking up a 380EZ for the first time, you can’t help but notice the large grip safety at the rear of the frame, which is well-positioned for consistent engagement. The pistol is the heftiest of all the compacts we tested, but it’s not burdensome to shoot or carry. Two eight-round magazines are included with the gun (more on those later). Because of the height of the frame, there is no need for a pinky extension on the magazine to enable a better grip. The  hammer-fired gun (the hammer is concealed in the slide) is a single-action only, and the trigger has a short travel length with a slight overtravel.

The 380EZ’s single stack magazines hold eight rounds and have a small nub on the side to help pull down the follower. This is a feature more commonly found on rimfire pistols and, in theory, makes it easier to load the magazine. I found, though, that the nubs were a little hard to grip. It was easier for me to load the magazine of the 380EZ just as I would any other pistol magazine.

Takedown and disassembly of the 380EZ should be familiar to anyone who owns an M&P or Glock. Pull the slide back, rotate the takedown lever down, and release the slide. Since the gun is hammer-fired, there is no need to pull the trigger to disassemble the gun. Cleaning the gun after my range session, I found it a bit finicky to disassemble compared to other hammer-fired or striker-fired guns. The workings of the internal hammer and grip safety made positioning the slide on the frame a bit of a tricky proposition.

The 380EZ’s ergonomics are hard to describe. The pistol doesn’t feel like a compact .380 ACP gun. It feels like a bigger 9mm pistol. As such, I pushed the first few shots with this gun down into the lower edge of the target, anticipating recoil that never showed up. Once I got used to the 380EZ’s low recoil and the short travel of the trigger compared to the other guns in the test, my comfort level improved and I was quickly able to speed up my shots and bring everything on-target. The slide was very easy to manipulate. Unlike a lot of guns in this test, the slide release lever was easy to actuate with my strong-hand thumb. 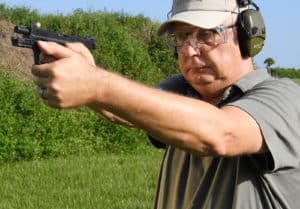 Issues
No stoppages or failures

The 380EZ did very well shooting off a rest from 15 yards. It emerged as the most accurate pistol in its class. The gun was very easy to shoot on the range. Fast, accurate follow up shots were a breeze thanks to its weight and comfortable feel in the hand. 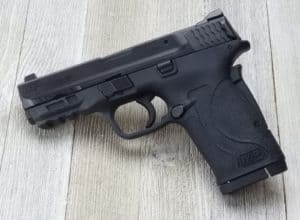 RESULTS OF OUR TESTING

Unlike the other four pistols we tested, the 380EZ had no stoppages or issues of any kind through 500 rounds.  This makes it the most reliable pistol of those we tested. We ran into some issues with properly engaging the grip safety when shooting from a rest; however, the rest of the time it ran like a Swiss watch. 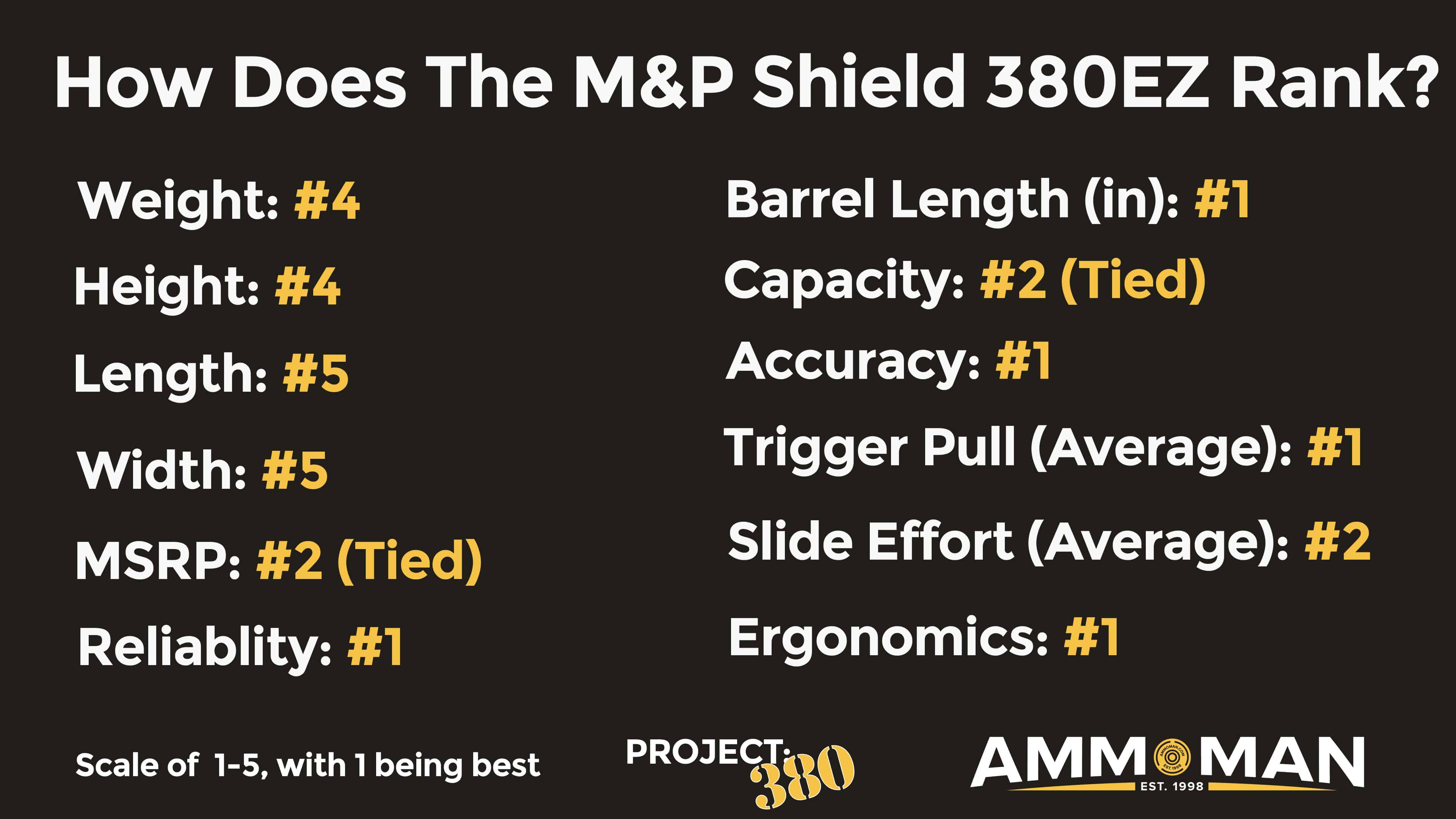 The combination of a great trigger, lightweight slide pull, and best-in-class accuracy make the 380EZ a great gun for those who are looking for a defensive pistol but who are unable to manipulate the action of a 9mm or larger pistol. As one of the largest pistols in our test, there may be better options for concealed carry. But, if you’re looking for a defensive pistol for the home and occasional use on your hip as a concealed carry pistol, look very hard at picking up an M&P Shield 380EZ.