There are few words that stir up more controversy in the firearms training world than the words “point shooting.” Mention those words in a pistol training class, and you’ll either get knowing nods of approval or be dismissed as a rank amateur. Point shooting is a phrase that means many things to many people. Understanding how it fits into today’s world of pistol marksmanship means understanding what it meant in the past and how it affects what’s being taught today.

In broad terms, point shooting means getting your hits by relying on how your gun is pointed at your target, rather than relying on sight alignment and sight picture. However, mention “point shooting” to many people, and the first thing that comes to their minds is the hip shooting techniques of the early to mid 20th century. Firearms instructors such as Jacob A. “Jelly” Bryce and others taught a fast draw technique where your gun was never raised higher than your navel after the draw. Using their techniques, you relied on your hand-eye coordination and body index towards the target to point your gun towards the target and get your hits.

If we’re honest, we’ll admit that this hip-shooting technique can work. After all, there were a lot of bad guys stopped by law enforcement officers trained using the hip-shooting method. It’s been proven that this technique can produce results. The question becomes then, is it worth the effort? Could the time it takes to learn how to hip-shoot accurately be better used with another technique?

Soon after World War II ended, Col. Jeff Cooper decided that he would answer that question. Col. Cooper set up the Leather Slap competition in Big Bear Lake, California to find what was the best way to hit a target quickly with a pistol. Competitors first started out using hip-shooting techniques that were in vogue at the time. However, they soon realized that you could get a shot off quickly using those techniques, it took time and quite a lot of shots to get your hits when you shot from the hip. 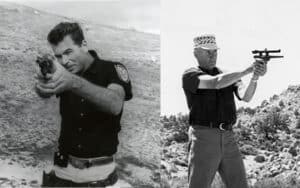 L.A. County Deputy Sheriff Jack Weaver was a regular competitor in the Leather slap matches. He is recognized as the first person who figured out that the brief amount of time it takes to bring the gun up to eye level results in greatly improved accuracy, and thus the Weaver Stance was born, along with the Flash Sight Picture. Jeff Cooper integrated these two concepts into his Modern Technique of the pistol, and firearms training would never be the same. It was easier and faster to get hits on target using the Modern Technique than shooting from the hip, and so using your sights (in some form or another) for every shot became the go-to technique for most pistol instructors. “Point shooting” and “hip shooting” started to mean the same thing, and were discarded in favor of other pistol shooting methods.

But they didn’t go completely away. The Weaver Stance works great, but it can present problems if your opponent is up close and personal. Your pistol is out in front of you at arm’s length in the Weaver Stance. This means that it’s harder to control if someone is able to get closer to you, and possibly take it away from you. At close distances, (3 yards and under), it’s better to have your gun nearer to your body, where leverage works for you and not against you. Instructors like Craig Douglas and others soon realized the need for some method of using your pistol in situations where you couldn’t see your sights, and shooting based on body index slowly edged it’s way into the mainstream once again.

Body index is simply pointing your body (and your gun) at the target, and relying on lining up the gun along with your body to the target. Most people can get solid hits at less than three yards by relying on how their bodies naturally point towards an attacker and aligning our guns with that movement. A defensive pistol held in your hand, snug under your armpit, will allow you to maintain control of your gun during the fiercest of struggles, yet still get good, solid hits on targets out to six feet. Your body index can also be used with both hands on your gun in order to get hits at longer distances, but anything beyond three yards should be down with good stance and bringing your pistol up to your line of sight, just like Jack Weaver did so many years ago.

Getting Your Hits When You Can’t See Your Gun

Let’s be certain about one thing: Body index shooting or instinctive shooting or point shooting or whatever you want to call it, is not a replacement for shooting good, tight groups using a good stance, good sight alignment and a good sight picture. Rather, point shooting or unsighted fire or whatever you chose to call it is a specialty technique to be used in special situations. If you’re not able to get a tight (6 inches or less) group on paper at seven yards, learning how to shoot without sights at one yard should take a back seat until you have a better grasp of the fundamentals.

Point shooting has fallen out of favor as a primary pistol technique, but it still has some uses in situations when there is no way to bring your sights into the fight. If you learn to shoot groups quickly and accurately , then learn to shoot up-close, you’ll learn how to come out ahead on what could be the worst day of your life.