What is a Striker Fired Action?

Selecting the right handgun can be a daunting task. When the gun you are choosing is for self-defense or concealed carry it’s even tougher. The choice is more complicated than just selecting a brand you trust. With the stakes involved in the purchase of a defensive handgun it isn’t a decision that should be taken lightly. At the same time, the decision is made much easier by the fact that some guns are simply better suited to defensive use than others. When my students ask, “What handgun is best for self defense?” I almost always answer with, “One with a striker-fired action.” The next question from curious students is an obvious one: “What is striker-fired?”

It is an excellent question that deserves a detailed answer. In contrast to striker fired guns, this hammer fired, single action 1911 uses the mass of a hammer to send a separate firing pin into the primer to ignite the round.

Every gun has an action. The action is the set of parts that load the firearm, lock the ammunition into the chamber, fire the round, extract and then eject the spent casing. When we narrow the field from all handguns to semi-autos, the actions become incredibly similar.

Almost all semi-auto handguns load the ammunition with the slide scooping the round from a magazine. Most lock the cartridge into the chamber in relatively similar ways.  Most guns use a common method of extracting and ejecting the spent casing. Even where a handgun completes one of these tasks differently there is very little impact on the experience of shooting the gun.

There is that one task of the action that can be different and often has an impact on the shooter and the shot. The mechanism that actually fires the gun. It’s this difference in guns that makes the question, “What is a striker fired handgun?” so valid.

The Action of a Striker Fired Handgun

When a striker fired pistol does its thing, it does it in a very simple and linear fashion. When the trigger is pressed, the striker moves slightly to the rear as internal safeties are defeated. Then the striker moves forward under the assistance of the spring that was compressed when loading the gun. The striker, which also acts as a firing pin, caries its mass into the primer. Energy from the detonation of the cartridge forces the bullet through the barrel and down range. As the bullet leaves, that energy also forces the slide to the rear. The spent casing is extracted from the chamber and ejected. As the slide moves forward the energy is used to load another round into the chamber and compress the striker spring. The striker spring is held safely to the rear until released by the press of the trigger.

A Time-Line of the Striker Fired Action Firearms

What Makes a Striker Fired Handgun Stand Out? My S&W M&P 9 Full Size is my concealed carry handgun. It isn’t glamorous. Instead it is a tool and it looks like a tool. It lives inside a Dark Star Gear Orion Holster with its striker fire action ready to do work.

The answer for lots of folks might be, “Nothing!”

From the factory your typical pistol with a striker fired action is plain Jane. I think of the typical Glock like an entry-level Jeep Wrangler. Not much to look at, but more capable than you would expect.

Like a Wrangler, a striker fired handgun isn’t necessarily the best gun for every application. I’m not going to spend time on a racing oval with a Jeep. It’s also not the choice for racing in the desert. But, that Jeep will get you just about anywhere you need to go in just about any conditions.

A Glock 19 or M&P 9 are going to do the same thing. They can get about any job done that needs to get done with a handgun. You might not be the fastest or the best looking while doing it, but the job will get done.

There are plenty of choices out there for shooters to make when they select their next handgun, and pistols that are striker fired are one of the most popular choices. So there must be something that makes these guns attractive.

Striker fired guns aren’t fancy and they aren’t glamorous. What they are is practical.

I think one word best summarizes what makes striker fired guns stand out compared to other types of handgun actions:

When you compare a striker fired gun to traditional double action, double action only, and single action handguns, it is the simplicity that helps them shine for shooters of all ability levels and over a wide variety of applications. The heart of a Glock 17 is its striker fired action. The striker is held under the spring tension until the safeties are defeated and the trigger is pressed.

A handgun with a striker fired action is efficient because it tends to have fewer parts than guns that are hammer fired. The striker takes the place of both the firing pin and the hammer. Eliminating the hammer and its associated parts reduces the number of parts and the gun’s complexity. This makes disassembly and reassembly simpler and leads to greater reliability and longer times between necessary service.

In a striker fired action, the striker is pushed to the rear then placed and held under spring tension when the gun is loaded. The operation of the action is linear in nature. In comparison, when the hammer of a TDA, DA, or SA gun operates it is forced to swing its mass in an arc. This generally requires that the bore of the gun is raised farther above the hand.

From an efficiency standpoint, a design difference tends to increase the leverage that acts on the hand when the gun recoils.

The typical striker fired gun reduces this leverage and reduces felt recoil. Less felt recoil can result in faster follow up shots, as the sights lift from the target less under recoil and return to the target more quickly. Unlike hammer fired actions, the striker from this Gen 2 Glock 17 operates in a straight line which helps keep the barrel of the gun close to the top of the hand. This in turn reduces the felt recoil.

When compared to a decent single action trigger, a stock trigger on a striker fired pistol falls behind, but not by much. Most folks, when they consider the whole package and the efficiency that comes with it, are perfectly satisfied with the trigger in their modern striker fired handgun.

Handguns fill different needs for different people. For some, a handgun is a precision tool used for hunting or trouncing friends on the range. For others, it is a racing machine designed to deliver accuracy at blistering speed. Another group of people look to handguns as a means to complete a collection of finely crafted machines.

For me, a handgun is a tool. A tool to protect myself and to defend my family.

My guns need to take a beating and keep running. My carry piece needs to devour whatever ammo I stuff into it, especially hollow points. It needs to be simple to operate and maintain. I need my handgun to be shootable.

So you ask, “What is a striker fired handgun?”

I gave you the technical answer above, but maybe it makes sense for me to share my personal thoughts:

A striker fired handgun is my personal protection tool of choice. It is reliable and simple. It is easy to shoot and easy to maintain. I count on it with confidence every day.

I suppose a textbook answer is nice and some gunwriter’s opinion could be meaningful. What’s probably more important are your thoughts.

So, in your opinion, what is a striker fired handgun? Let us know below in the comments. 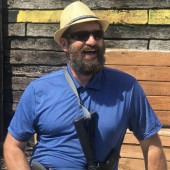