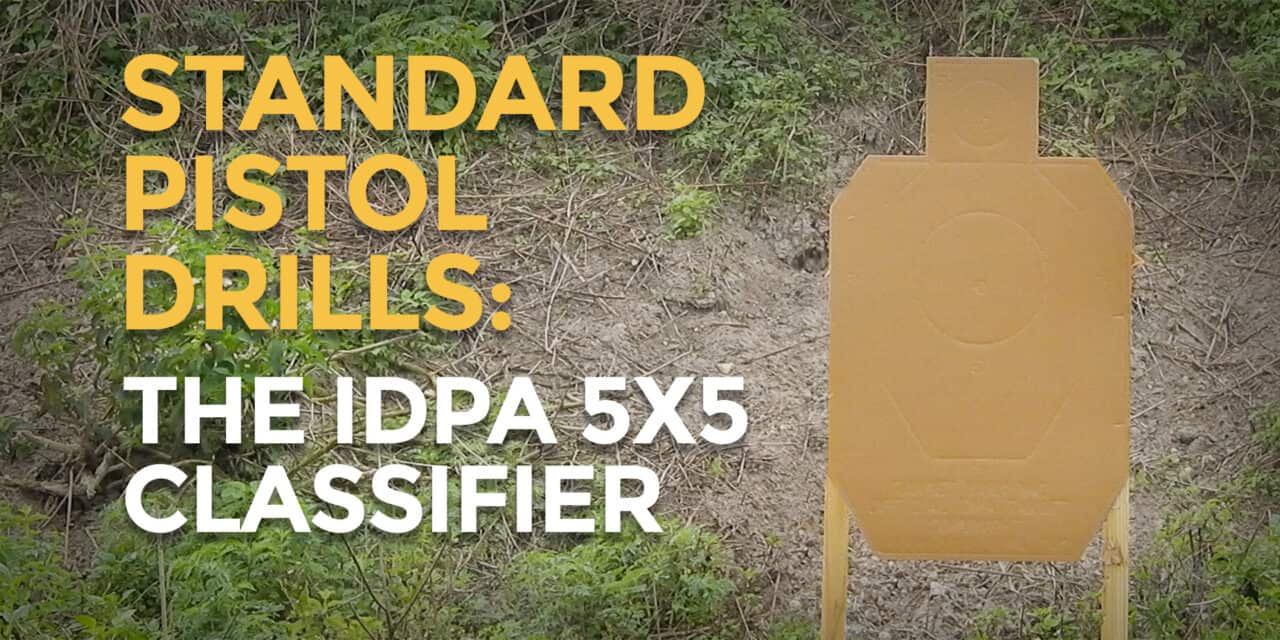 The IDPA 5×5 Classifier: An Entry Point Into Practical Pistol

All shooters are not created equal. Some people are blessed with more natural talent. Others put in long hours of dry fire practice and training sessions to perfect their pistol marksmanship. For newcomers to the sport, it can be breathtaking to watch the faster shooters compete at such a high level. However, it can also be a bit discouraging to place at the bottom of the results, match after match after match. The International Defensive Pistol Association, or IDPA mitigates this problem by using a standardized pistol drill, called the IDPA 5×5 Classifier, to group competitors together by skill level. The better your score on this drill, the higher your classification.

IDPA is a practical shooting sport founded in 1996 as a way to return the sport of practical shooting back to it’s “practical” roots. The founders of IDPA believed that the dominant sport at the time, the United States Practical Shooting Association, had become too specialized as a sport. IDPA was intended to return practical shooting to being a sport with real-world applications for the participants.

Run What You Brung

The stage setup for the original IDPA Classifier

IDPA also groups competitors into divisions according to the type of pistol they use in a match. If you’re shooting a 1911 with an 8 round magazine, you’ll be reloading more often than someone who has 10 rounds in their magazine. Your classification is a measure of your skill level, your division defines what gear you use in a match.

The original IDPA Classifier bore a distinct resemblance to the law enforcement qualification drills, requiring 50 rounds, movement to cover, and shots from 25 yards. The course of fire included variations of the El Presidente and Mozambique drills, and you needed to have items like barricades and plastic barrels on-hand as well.

This classifier required a fair amount of time to set up and run. You need to score multiple targets multiple times. Plus, set up and takedown of the targets and props takes time as well. IDPA leadership saw a need to create a classifier that shooters could use with minimal setup, but that was still an effective measure of performance.

I Could Tell You, But It’s Classified

Enter the new IDPA 5×5 Classifier. The course of fire is shorter (25 rounds) than the old classifier. It uses a single target. You shoot from one position, and you don’t neeed stage props or other items. It’s simple to run, yet it measures a variety of shooting skills that are essential to IDPA. 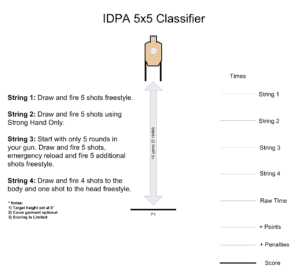 The new 5×5 Classifier needs just one target. It’s much easier to set up.

The course of fire for the drill is as follows:

Setup up a single IDPA target 10 yards away from the shooter. The shoulder of the target should be 5 feet high. Scoring for the drill is Limited. This means extra shots or makeup shots on the target are not allowed. A cover garment (a feature standard for most IDPA matches) is optional.

The scores in IDPA are based on a combination of your hits on-target and the time you needed to make those hits. The IDPA target has three scoring zones, Down Zero, Down One and Down Three. A hit in the Down Zero portion does not add any penalty time to your score. A hit in the Down One adds one second to your score, and a hit in the Down Three area towards the edges of the target adds three seconds to your score. A missed shot adds five seconds, so make each shot count. Your score for the classifier is the total amount of time you need to shoot each string, plus penalty points from your hits (or lack thereof) on the target.

As you may have figured out, IDPA places a premium on accuracy. If you draw and shoot String One of the classifier in, say, three seconds, but place three of your five shots in the Down Three area of the target, you’ve effectively added NINE WHOLE SECONDS to your score. Your score for that part of the classifier isn’t just the three seconds you needed to draw and shoot your pistol. Your score is twelve seconds. Twelve seconds on String One is quite slow.

Maximizing Your Score on the 5×5 Classifier

In addition to this, you are required to draw your pistol four times during the IDPA 5×5 Classifier and perform an emergency (slide lock) reload. Shaving a few seconds off those actions can improve your overall score. Also, the 5×5 Classifier has a lower round count (25) than the older, 50 round classifier. This gives you even less room for error, and increases the payoff for accurate hits on the target.

As I said before, your classifier score determines who you compete against at an IDPA match. The gun you choose to shoot determines your division.

There are eight divisions in IDPA which covers a wide variety of pistols:

We’ll cover some of the other things, such as cover garments, that make IDPA different from other shooting sports in a later post. For now, let’s look at one of my recent practice runs on this drill. I shot it with a CZ P07, which is the gun that I use to compete in SSP (Stock Service Pistol), using Fiocchi 115gr 9mm ammunition, and shooting from a Blade-Tech Classic OWB holster.

Scoring for the 5×5 Classifier. All times are after applying penalties to your time.

Overall, this score was pretty good compared to my past performance. However, I had three hits outside of the Down Zero portion of the target that added three seconds to my final score. Those few penalty points were enough to move me from easily classifying as a “Sharpshooter” to just barely squeaking into that division. In addition to this, my draw time is slow, glacially slow, and my reloads are sloppy as well. Fortunately for me, both of these problems can be corrected with more devotion to dry fire practice.

The IDPA 5×5 Classifier does more than just show how you compare with other competitors in IDPA. Doing well in this drill means mastering some of the most fundamental elements of pistol shooting, such as a quick and safe draw, sight picture, and trigger control. Those skills are useful not only at a match, but when a life is on the line as well. If you carry concealed, but haven’t done so already, consider attending a match. No, it’s not the real thing, but it will help you prepare for when your life is literally on the line.